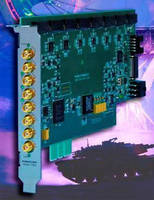 Supporting up to 8 Pentek Virtex-6 CobaltÂ® and Pentek Virtex-7 Onyx(TM) boards at sample clock rates up to 800 MHz, Model 7893 single-slot system synchronization and distribution amplifier supports multi-channel, phase-coherent applications. Up to eight 7893 boards can be linked in cascade mode to allow 64 Onyx or Cobalt boards to receive common clock along with timing signals for synchronizing, triggering and gating functions.

New Pentek Board Synchronizes Up to 256 Channels for Military, Medical Imaging and Beamforming Applications

UPPER SADDLE RIVER, NJ-Pentek, Inc., today introduced a system synchronization and distribution amplifier, the Model 7893 PCIe board. This synchronizer is designed to support up to 8 Pentek Virtex-6 Cobalt® and Pentek Virtex-7 Onyx(TM) boards at sample clock rates up to 800 MHz. In the cascade mode, up to eight 7893 boards can be linked to allow 64 Onyx or Cobalt boards to receive a common clock along with timing signals for synchronizing, triggering and gating functions.

Synchronization is important in multichannel applications such as phased array radar, diversity receivers, and direction finding and beamforming antennas. These applications abound in military systems, but the same concepts are also used in medical imaging and industrial inspection systems where beamforming improves the image resolution.

"New beamforming applications call for higher channel counts with precise sampling, gating and triggering synchronization across all channels," said Rodger Hosking, vice president of Pentek. "The cascadable design of the 7893 delivers a proven and systematic solution for synchronizing up to 64 boards and up to 256 channels to form large arrays very efficiently. This product saves our customers precious development time during system integration," he added.

Supporting Features and Products
The Model 7893 is a single-slot PCIe board that uses the slot solely for physical mounting with no electrical connections; power is supplied through a standard six-pin PCIe power connector.

The 7893 accepts a user supplied external clock from a front-panel subminiature version A (SMA) connector, from the input low-voltage positive emitter-coupled logic timing bus, or from the on-board programmable voltage controlled crystal oscillator (VCXO). The VCXO can operate alone or can be phase-locked to a system reference clock signal. Each 7893 has four programmable clock outputs available via SMA connectors on the front panel for distribution of sample clocks to other boards.

Operational parameters for the 7893 are programmed through the universal serial bus (USB) port, including VCXO frequency, clock dividers and delays, so the user can make timing adjustments on the gate and synchronize signals before they are sent to buffers for output through eight timing bus connectors. The USB port can also be used to generate gate/trigger and sync/pulse-per second signals for distribution to all connected boards.

Pricing and Availability
The Model 7893 Eight-Channel System Synchronization and Distribution Amplifier starts at $4,995 USD for the PCIe board. Delivery is 8 weeks ARO.

For access to the release and data sheets, please visit: www.pentek.com/whatsnew/viewrelease.cfm?index=163