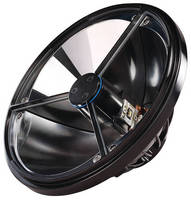 Stamford, Conn. -- Hoffman Performance Lighting has introduced the first-ever PAR64 LED Landing Light, a drop-in replacement for existing Q4559 and Q4559X quartz halogen lamps. The ruggedized PAR64 is used on a wide range of commercial, civil, law enforcement, aero-medical, and military aircraft. With FAA approval pending, this new landing light technology meets or exceeds all FAA and MIL specifications and is fully qualified to RTCA DO160, MIL-STD-810, MIL-STD-461, and other requirements for both fixed-wing and rotor-craft applications.

Hoffman's PAR64 LED Landing Light is rated for more than 50,000 hours of operating life and maintains over 600,000 candela output over its entire service life. In comparison, the output of the incandescent bulb degrades quickly over the service life of the lamp, losing as much as 50% of initial output in the first 30 hours of a bulb’s 100 hour rated operating life.

The innovative control electronics, ruggedized housing and LED design of Hoffman's PAR64 solve inherent incandescent design concerns such as abbreviated service life and premature failure due to extreme temperatures, shock, vibration and weather that result in costly service delays. This new LED Landing Light consumes only 10% of the power required by current sealed-beam lamp technology. Operating at 80% efficiency, and losing just 20% of its energy as heat, the PAR64 LED design eliminates the possibility of structural damage to aircraft bodies from thermal radiation.

Designed as a direct drop-in replacement to Q4559 and Q4559X lamps, the PAR64 LED Landing Light is easy to install and requires no airframe modifications or training for maintenance. The lamp assembly is ROHS, WEEE and REACH compliant, recyclable, and free of toxic chemicals. Designed for safety, the PAR64 features three independent LED light sources to provide triple redundant reliability in the event of an LED failure. The protective lens is UV resistant, hard-coated, and shatterproof.