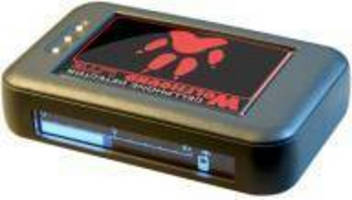 Wolfhound-Lite enables security personnel to continuously scan for all cellular voice, text, or data transmissions from contraband cellphones, without using jamming technology. High-speed scanning multiband receiver is employed, as well as omnidirectional antenna system that detects cellphone RF energy algorithm and locks on to it. Running on Li-Ion 9 V batteries for up to 8 hr, device vibrates to alert operator of cellphone activity, while signal strength is indicated via OLED display.

METUCHEN, N.J. - Berkeley Varitronics Systems, Inc. (BVS), a leading provider of advanced wireless solutions and products to the domestic and international wireless telecommunications industry, today announced the release of an palm-sized cell phone detector called the Wolfhound-Lite. Wolfhound-Lite is the second in a line of BVS' advanced cell phone detection products and can be concealed in any pocket or worn on a belt clip like a wireless pager.

When Wolfhound-Lite vibrates, security and correctional professionals are alerted to nearby cell phone activity. The device runs on standard Lithium Ion rechargeable 9-volt batteries for up to 8 hours enabling security personnel to continuously scan for all cellular voice, text or data transmissions while keeping their eyes and hands free.

According to the U.S. Department of Commerce's National Telecommunications and Information Administration (NTIA), the use of contraband cell phones by inmates has risen as the U.S. prison population continues to expand. The number of cell phones confiscated by prison officials has dramatically increased in only a few years. For example, during 2006 California correctional officers seized approximately 261 cell phones in the State's prisons and camps; by 2008, that number increased ten fold to 2,811. Maryland and other States have also seen a rise in the number of confiscated cell phones in their State prisons. In 2009, Maryland prison officials confiscated nearly 1,700 phones, up from approximately 1,200 phones the year before.

In order to address this growing problem, the Wolfhound-Lite is designed to detect and locate contraband cell phones without using jamming technology that can interfere with authorized communication channels or 911 emergency calls. In fact, jamming is a violation of FCC rules and the CTIA, a leading wireless industry association, is on record as opposing jamming. Other solutions may require an entire network infrastructure of wireless sensors hard-wired throughout a facility that can be expensive and difficult to deploy.

Wolfhound-Lite contains a high speed scanning multi-band receiver in a pocket-sized pager configuration. Its integrated omni-directional antenna system allows correctional personnel to 'sniff out' a cell phone's unique RF energy algorithm and lock on to it. The unit's bright but discreet OLED display indicates signal strength. Wolfhound-Lite also provides a stealth mode that alerts only the operator with vibration as soon as any cell phone is detected.

Most correctional facilities and prisons utilize a significant amount of steel and are not RF friendly resulting in poor cell phone coverage. This requires cell phones to transmit at higher power levels in order to maintain connection with nearby base stations. Wolfhound-Lite takes advantage of this anomaly, allowing the instrument to easily 'sniff out' the cell phone quickly and discreetly.

"The Wolfhound-Lite will allow correctional facilities to enforce an affordable NO CELL PHONE USE policy, since each security officer could potentially be equipped with a cell phone detecting watchdog," said Scott Schober, President and CEO of Berkeley Varitronics Systems. "We believe secure facilities will come to depend on the Wolfhound-Lite to detect and confiscate the increasing number of contraband cell phones being smuggled in prisons that are not only used to threaten public safety, but also contribute to ongoing criminal activity."