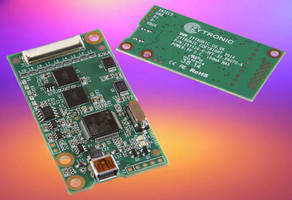 The ZXY110 is offered in two different versions; the 32-input version covers PCT p-cap touch sensors with up to approximately 19 inch diagonals, while the 64-input version is suitable for PCT sensors with diagonals of between 19 inch and 46 inches. Connection with the PC is via a USB 2.0 interface.

Updating of touch event coordinates is carried out by the ZXY110 in less than 5msec, resulting in a satisfying user experience. This product’s key attribute is proprietary new architecture and firmware providing industry-leading resilience to electro-magnetic interference (EMI). This ability to combat EMI comes from the new touch controller’s ‘smart’ frequency-scanning function - where, the operating frequency moves dynamically between 1.3MHz and 2.5MHz in order to avoid detected environmental ‘noise’ that would otherwise prevent the detection of touch events.

Suitable for use with Windows 7,Windows 8 and Linux operating systems, this item of hardware is a plug & play human interface device (HID). The touch controller may also be utilized in conjunction with Zytronic’s freely downloadable ZyConfigTM software tool, which enables touchscreen integrators to access and tune the controller’s firmware settings, should they wish.

To ease implementation, the ZXY110 shares the same mounting arrangement as the company’s widely-used ZXY100 touch controller. As a result it can be retrofitted in order to enable performance improvements to existing PCT based touch system designs. Furthermore, there is potential for OEMs requiring high volumes to enter into ZXY110 chipset agreements with Zytronic, in order to embed the controller onto a motherboard in space critical applications.