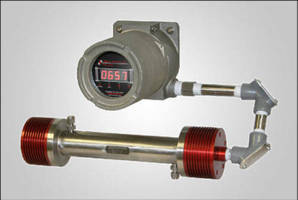 Model TDL-506 integrates vertical-cavity surface-emitting laser (VCSEL) into its housing, which can monitor R-branch of oxygen A-band at 760 nm. Analyzer is designed to account for flow rate variations, pressure/temperature fluctuations, and stream pollutants and utilizes close-coupled sampling to ensure accuracy and low maintenance. Probe draws continuous sample from process stream into flow cell via membrane, which filters out interfering particles.


AAI presents an industry-proven and cost-effective solution for oxygen monitoring needs: the TDL-506. At the forefront of a heavily saturated market, the TDL-506 outperforms competitors by virtue of its robust, evolved design. Harnessing the full potential of surface-emitting laser technology, this system is built to produce accurate, fast, and stable oxygen measurements in even the most volatile process streams.

The TDL-506 is named for its core component-the tunable diode laser. The ability to emit high-intensity light at an extremely specific wavelength is critical for monitoring the sharp, isolated absorbance peaks that are characteristic of diatomic oxygen. Rugged and power-efficient, the vertical-cavity surface-emitting laser (VCSEL) housed in the TDL-506 provides this ability. This system is constructed specifically to monitor the R-branch of the oxygen A-band at 760 nm, minimizing interference and optimizing detection resolution.

An Introduction to VCSEL Technology

The laser diode built into the TDL-506 is largely a byproduct of a global, multi-decade telecommunications initiative. With the advent of the internet in the late 1980's came a vision of groundbreaking network speeds and optical computing (transmitting and storing information using photons rather than electrons), all driven by lasers.

Conventional distributed feedback (DFB) lasers were extremely expensive, difficult to manufacture, and thus commercially impractical; a complete redesign of the laser diode was in order. The efforts were fueled by heavy investments from the Defense Advanced Research Projects Agency (the research arm of the U.S. Department of Defense), which sought to use the still embryonic networking technology for various military systems.

The vertical-cavity surface-emitting laser (VCSEL) was born. Unlike its predecessors, the VCSEL's manufacturing costs are low, and the units can be tested at the mid-production wafer level. Although the technology was developed primarily with projects such as Gigabit Ethernet and commercial photonics in mind, AAI engineering has deployed the VCSEL for process monitoring in the form of the elegant TDL-506. This analyzer was built to fulfill the performance specifications of the most demanding oxygen sensing applications at a price point which is simply unfeasible for any system constructed around the older, industrially entrenched DFB lasers.

Any laser diode such as the VCSEL is a semiconductor device that converts electrical current into coherent, monochromatic light; the light emitted from the diode is all of one specific wavelength, and all waves are in phase with one another. The spectroscopic value of employing a laser as an optical pump is that all light passing through the sample is of the same, highly precise wavelength, enabling the system to monitor sample absorbance at one extremely well-defined spectral region. For a component such as oxygen, with very sharp and narrow absorbance peaks, the capacity for isolating these high-absorbance lines is critical for monitoring component concentration.

In the TDL-506, the VCSEL is tuned using current to the exact wavelength that coincides with the absorption A-band of oxygen (around 760 nm). This sharp wavelength selectivity minimizes interference from other stream components, and the fast scan time allows the analyzer to enhance the signal-to-noise ratio.

Any analyzer is only as competent as the design of its sampling mechanism. AAI's innovative close-coupled sampling procedure distinguishes the TDL-506 from other laser-based oxygen monitors. Engineered to account for flow rate variations, dramatic pressure/temperature fluctuations, stream pollutants, and other harsh process realities, close-coupled sampling ensures greater accuracy and maintenance-free performance than systems relying on cross-spec or extraction sampling.

The TDL-506 is close-coupled to a chimney and measures directly on the stack. The probe draws a continuous sample from the process stream into the flow cell via a membrane that filters out interfering particles. Unlike cross-spec analyzers which measure across the pipeline, the TDL-506 can be regularly zeroed to ensure accurate concentration readings over the long term. Our method also steers clear of the pitfalls of extraction sampling, where the sample is dried, cleaned, and inevitably diluted before measurement.

Applied Analytics, Inc. manufactures process analyzers and sampling systems for the chemical, petrochemical, power generation, and pharmaceutical industries, as well as various environmental applications. We have over two decades of experience in designing and installing monitoring solutions that are rugged in their stability and elegant in their automated performance. AAI is based in Concord, MA.