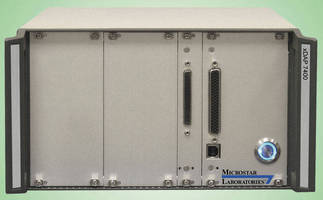 For data acquisition and control projects, DAPL 3000 OS software provides all necessary device control functions and takes care of all hardware specifics. USB 2.0 support can push sustained data transfers of 8 million 16-bit samples/sec to PC host, and capacity reserve remains in onboard processors after critical device control processing, allowing it to be leveraged in various ways. Solution provides ~100 pre-programmed processing tasks that can be applied to one channel or hundreds.

Like the DAPL 2000 system that preceded it, DAPL 3000 provides all of the device control functions necessary. The DAPL 3000 system takes care of all of the hardware specifics, moving them out of complicated host OS environments and putting them close to the hardware for maximum efficiency. On your host system, just specify the address of the Data Acquisition Processor nodes to connect. The DAPcell services establish links to access your data streams. The USB 2.0 support in DAPL 3000 can push sustained data transfers of 8 million 16-bit samples per second to the PC host - a sustained 128 million bits per second, about as much as current generations of PC systems can withstand.

But the DAPL 3000 system is more than just device control. A reserve of capacity remains in the onboard processors after critical device control processing is done. That extra capacity can be leveraged in many ways.

Leveraging Processor Capacity
Suppose that you measure hundreds of thermocouple channels to obtain a temperature profile. Thermocouples are inherently slow and noisy devices. You will capture thousands of samples from each of them, not because you care about every single sample, but because you need the statistical advantage of combined measurements to obtain accurate temperature information. You could elect to choke your data transfer channels with all of this data - just so you can average most of it away. But preprocess your data at the source and you need to transfer only the information that you care about.

Maybe your host processor is capable of covering mundane details of thermocouple linearization and estimation, despite a resource-hungry operating system. How about computing power spectral density on 100 independent data channels at a sustained, real-time pace? For serious number crunching, the more processing capacity you have, the better.

Close-to-Hardware, Time-Critical Control
Pushing signals through hardware, device drivers, operating system layers, and complicated application environments, and then reversing this sequence to get responses back to hardware, is a perilous process. For consistent, fast, guaranteed response, you need to "cut out the middleman" layers, and put real-time activity as close as possible to the hardware level. The new event-driven data systems in DAPL 3000 allow more predictable response to real-time events in general. The DAPL 3000 system adds multiple priority scheduling levels to the simple task management scheme of DAPL 2000, so that your high-priority processing can detect events and deliver timely responses, almost as if other number crunching activities were not there.

Revised Command Library
One of the difficulties of data acquisition is that digitizers produce a fixed point number representation that has very little relationship to real world processes. The characteristics of sensors, signal conditioning gains, and digital representations determine what the raw measurements mean. While attempting to extract information, it is easy to lose significance because of integer range and bit-truncation effects. What you really want is probably not the raw digitizer numbers, but rather the numbers in engineering units reflecting the property you are trying to measure.

Use the DAPL system to apply appropriate conversion, compensation, and scaling operations so that factors related to your hardware components are already covered by the time data leaves your hardware system. Your application can then receive measurements as direct meaningful quantities. To support this, the DAPL 3000 system has been rewritten to expand its support for higher-precision data types.

Retained Features and Compatibility
Though internally the DAPL 3000 system is a near-complete rewrite of the DAPL 2000 system, it retains a high degree of compatibility with applications developed for DAPL 2000. Microstar Laboratories continues its policy of supporting hardware and applications long beyond the limited life cycle of most commodity data acquisition products.