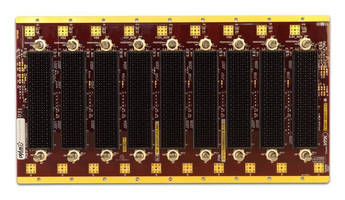 Compliant to VITA 65 specification, standard profile configurations for OpenVPX backplanes include 5-, 9-, and 18-slot 3UÂ versions as well as 2- and 5-slot 6U versions. EachÂ is availableÂ with or without rear I/O connectors and designed to cable over to Pixus power boards for VITA 62 or PICMG 2.11 power supplies. Header options are available for VITA 46.11 for system management.

Pixus Expands OpenVPX Backplane Offering with New 3U and 6U Configurations

Pixus has greatly expanded its OpenVPX enclosure offering along with new backplane configurations.  The company has new 3U backplanes in 5, 9, and 18 slots and new 6U versions in 2 and 5 slots.  The backplanes come with or without rear I/O connectors and are designed to cable over to Pixus power boards for VITA 62 or PICMG 2.11 power supplies.   They have header options for VITA 46.11 for system management.

Pixus also offers OpenVPX backplanes to VITA 66 for Optical and VITA 67 for RF.  The company has a wide range of backplane/chassis options for other architectures as well such as MicroTCA and AdvancedTCA.  Pixus now provides configuration/integration options, including SBCs, switches, system managers, FPGAs, and specialty boards from key partners.

Leveraging over 20 years of innovative standard products, the Pixus team is comprised of industry experts in electronics packaging. Founded in 2009 by senior management from Kaparel Corporation, a Rittal company, Pixus Technologies' embedded backplanes and systems are focused primarily on  ATCA, OpenVPX, MicroTCA, and custom designs.    Pixus also has an extensive offering of VME-based and cPCI-based solutions.   In May 2011, Pixus Technologies became the sole authorized North and South American supplier of the electronic packaging products previously offered by Kaparel Corporation and Rittal.
Share