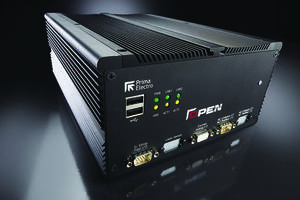 OSAI has designed and developed a new CNC control platform. Within the flexible element of the OPENcontrol family, the OSAI OPEN-Xli is the highest performing CNC of the OPENControl Family, adopting an i5 CPU particularly suited for Dual Operating System configuration for the simultaneous execution of Windows CE Operatings (real time) and Windows 7 Embedded (HMI). The ability of the CNC to isolate the execution of the operating systems by assigning a CPU core to each one, provides the system with the characteristics of very high speed, coupled with graphical processing capabilities of Windows desktop versions.

The OPEN-Xli CNC has up to 4GB of ram memory, part program storage up to 128 GB Compact flash, four USB 3.0 ports, two USB 2.0 ports, touch screen, touch pad or track ball and Ethernet. The OPEN-Xli CNC can control up to 64 axes, 24 processes (12 interpolated per process). The OPEN-Xli CNC is a modular system with servo controlled axes and I/O modules distributed on a digital fieldbus. The axes can be controlled digitally with EtherCat, CanOpen, OS-wire and Mechatrolink 2 /3. The I/O can use the same bus as the axes or can be split between two buses (e.g. OSWire and EtherCAT).

OSAI manages (HSM) High Speed Machining. With the advent of extremely rigid machines, the machining of profiles as a sequence of linear micro-interpolations is not ideal. There are two possible ways of solving the problem, by either regulating the dynamics of the movement or the geometry of the trajectories.

Typically, CAD/CAM systems are capable of providing machine coordinates directly, by processing the data that describes the surface to be milled. This means that the programs normally generated by CAD are closely dependent upon the geometry of the tool and in the case of machining 5 coordinated axes, the kinematics of the machine.

With the ability to process 12,000 program blocks of 5 axis motion every second, OSAI can manage either the dynamics of the movement or the geometry of the trajectories, it is either a question of filtering the actuation of the commands, creating a "soft" output to the servomotors, without changing the programming concept based on microscopic straight lines, or revolutionizing the programming method, by interpreting the programmed values as a set of points to be approximated in the best possible way.

The OSAI OPEN-Xli CNC offers full (OVC) OSAI Volumetric Compensation for roll, pitch, and yaw. Roll is rotation about the X axis, pitch about the Y axis, and yaw about the Z axis. If the machine were not built square, but the bed of the machine looks like a parallelogram, you could compensate for that. Imagine a cantilever type machine where when one side of the X axis is at 0, the other side might be at 0.5 and further along the way they meet, then with X at 10, the other side is at 9.5, this can be compensated.

With the ODM (OSAI Device Manager), the integrator can manage the kinematics of the machine, TCP (Tool Center Point), AMP (Adjustable Machine Parameters) and Spline geometry. The TCP can manage up to 3 rotary axes plus 3 linear axes. The TCP calculations are applied on the spline as other geometric entities. The spline can be applied on the tool tip or on the axes positions. The axes belonging to the spline can be configured in groups of axes that can be selected during programming. It is also possible to manage tilting and prismatic heads with the same configuration simply differentiating them through configuration of the angles between rotary axes and the system.