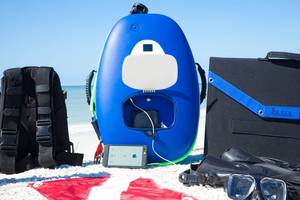 NOMAD Tankless Dive System consists of an air compressor, which floats above surface and pumps air through a 40 ft hose. Unit features data recording system for collecting data such as GPS, depth and temperature. Nomad is attached to a backpack mount and is fully charged using an optional solar panel. The recorded data is uploaded to database through mobile app.

The Next Generation of Tankless Dive Systems

Brownie’s Marine Group (BMG), the parent company to legendary diving brands such as Brownie’s Third Lung™ is introducing a new brand of innovative dive systems called bLU3. In addition to representing the company’s plans to roll out a series of three models, and a method to differentiate the name from the color, the ‘3’ in place of an ‘e’ is a direct homage to the Brownie’s Third Lung™ brand – the flagship product of the parent company.

bLU3 truly is the next generation for Brownie’s Marine Group as it will be headed by Blake Carmichael, the son of Robert Carmichael, founder/CEO of BMG. The legacy continues not through inheritance, but by earnest effort, talent and skill. Blake applied his degree in electrical engineering to develop the introductory model – NOMAD by bLU3.

With an air of pride, Robert stated “It’s been a dream of mine to develop this product. The technology to do so has finally been developed and the fact that Blake and I are able to work together on making it a reality is the ultimate fulfillment of that dream, it’s no longer mine – it’s ours.”

In addition to co-engineering the prototype, Blake has played a vital role in building the brand. Writing patents, developing media and preparing the launch of a crowdfunding campaign are among the list of contributions made alongside co-founder, Wesley Siebenthal – an accomplished mechanical engineer and talented inventor.

NOMAD by bLU3 is an ultra-portable, tankless dive system. An air compressor floats above the surface in an all-in-one housing and pumps air through a 40-foot hose. The entire unit attaches to a backpack mount that doubles as a dive harness. It is battery-powered; charged with a single cable and can even be fully charged by an optional solar panel, in about 3 hours.

“Our goal with the bLU3 line is to fill the void between snorkeling and SCUBA diving. We want to make ‘getting and staying’ underwater easier, more enjoyable, cheaper, and more rewarding than it currently is. And on our way to getting millions of new people under the water, we have a very important and exciting mission that can be accomplished – fully documenting the world's shallow reefs around the world to help build a future of healthy oceans,” Blake explained.

The NOMAD will have an integrated data recording system that will collect valuable data – such as GPS, depth, temperature and more. These readings can then be uploaded to an online database via a mobile app. The goal is to prevent "Environmental Amnesia" – a term used to describe the unnoticed degradation of ocean health over decades.

The NOMAD by bLU3 campaign premiered on Kickstarter today at 10:00AM EST. The team behind bLU3 hopes to acquire proof of concept and reveal a market for the all-in-one system, in order to raise capital for production and entice investors for further development.