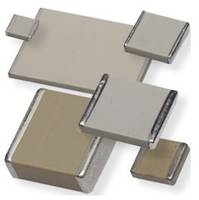 NHB Series Ceramic RF & Microwave Capacitors are offered in 1111 size and come with a capacitance range of 0.3 pF to 100 pF. Units come in bulk chips or with tape or reel packages and magnetic and non-magnetic terminations. Suitable for cellular base station equipment, broadband wireless service, point to point/multipoint radios and broadcasting equipment applications, products can be operated up to 175°C temperature and at 500 VDC.

The series is available in 1111 size with capacitance ranging from 0.3pF to 100pF. All capacitors are packaged either as bulk chips or with tape or reel. All components are RoHS compliant and available with magnetic and non-magnetic terminations. They also provide as a good alternative for MIL-PRF-55681 / CDR capacitors. European Military, space grades and custom made capacitors are also available on request.

New Yorker Electronics is franchise distributor of Exxelia Temex, a member of the Exxelia Group, and supplies its full line of Film, Mica, Tantalum, Aluminum Electrolytics and Ceramic Capacitors as well as its EMI/RFI Filters, Magnetics, Position Sensors, Slip Rings and Rotary Joints.

New Yorker Electronics is a certified franchised distributor of electronic components, well known for its full product lines, large inventories and competitive pricing since 1948. New Yorker Electronics is an AS9120B and ISO 9001:2015 certified source of capacitors, resistors, semi-conductors, connectors, filters, inductors and more, and operates entirely at heightened military and aerospace performance levels. It also functions in strict accordance with AS5553 and AS6496 standards - verifying that it has implemented industry standards into everyday practices to thwart the proliferation of counterfeit parts. It is a member of ECIA (Electronics Component Industry Association) and of ERAI (Electronic Resellers Association International).