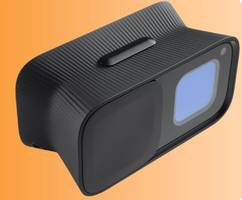 Vancouver, Canada – January 31, 2019 – NexOptic Technology Corp. (“NexOptic” or the “Company”) (TSX Venture: NXO) (OTCQX: NXOPF) (Frankfurt: E3O1) reports today that it is pursuing significant opportunities to accelerate its growth, some of which were generated at the 2019 Consumer Electronic Show (CES) in Las Vegas earlier this month.

At CES, NexOptic held prearranged meetings with some of the world’s largest technology companies, where conversations are ongoing, and the Company received strong expressions of interest to distribute and market DoubleTake™ globally.

The awards, expressions of interest, and accolades from multiple media outlets, retailers, distributors, and technology companies were in part due to NexOptic showcasing the significant power of its DoubleTake lenses as well as the revolutionary capabilities of its artificial intelligence and smartphone lenses for photography at a private NexOptic viewing suite throughout the multi-day CES event.

NexOptic’s unique DoubleTake lens is a near diffraction-limited 95mm F1.8 (35mm equivalent of 530mm) lens consisting of plastic, glass, and mirrored elements in a novel telescope-like configuration. The Blade Optics™ module allows the longer focal length lens to be compressed into a much smaller volume, so a lightweight device can take exceptional long-range images.

The company is on track to sell DoubleTake to consumers in late 2019.

What separates DoubleTake from any other binocular product is its Blade Optics technology. NexOptic’s patented and patent-pending suite of optical technologies has put the power of a telescope in a rugged handheld device. By utilizing dual lenses, one wide-field and one narrow-field, DoubleTake makes finding, focusing, and zooming in on objects far quicker, easier, and more enjoyable than when using conventional products. It digitally supports 4K video, 12 MP photos, and audio with an SD card slot option. Users can also wirelessly share their media and/or display screen with smartphones.

DoubleTake recently made its debut at the SHOT Show in Las Vegas as well as the Seattle Boat Show.

NexOptic also reports that effective today, founding Director, G. Arnold Armstrong has retired at the age of 93 from its Board of Directors.

“The technology NexOptic is developing is very exciting, and I have full faith the team will accomplish its goals,” said Mr. Armstrong. “I’m proud to have been part of this remarkable venture at its earliest stages, and I’m looking forward to what comes next as the Company continues with its advancements.”

“On behalf of NexOptic’s Board of Directors, I wish to extend my sincere gratitude to Arnold,” said Paul McKenzie, NexOptic’s President and Chief Business Officer. “From the very beginning, Arnold saw the value and the potential of what NexOptic’s technologies could become. It’s been my great pleasure to have had the good fortune to work closely with Arnold.”

NexOptic also reports that it has granted an aggregate of 2,650,000 stock options to some of its Directors, Officers and Consultants having an exercise price of $0.65 and a term of five years.

NexOptic is an innovative optical development company, which aims to enhance the way we view the world around us. Currently focused on engineering its first consumer product for the growing outdoor recreation market, as well as a demonstration prototype for the mobile device market, NexOptic is aggressively pursuing a multi-pronged optical innovation strategy. Utilizing Blade Optics™, the Company’s developing suite of optical technologies, NexOptic can increase aperture sizes within given depth constraints of various imaging applications. Increasing the aperture size enables a lens system to have an improved near diffraction-limit, providing the potential for greatly increased resolution. In 2018 we grew our suite of innovations to include artificial intelligence (AI), developing ground-breaking AI for our optics.

Blade Optics refers to NexOptic’s lens designs, algorithms, and mechanics, which vary from patented to patent-pending, and includes all of the Company’s intellectual property and know-how.

NexOptic trades on the TSX Venture as “NXO”, on the OTCQX under the symbol “NXOPF,” and on Frankfurt as “E3O1”. More information is available at www.nexoptic.com.