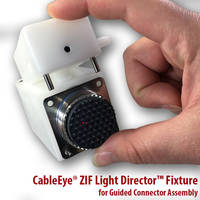 CAMI and Doyle developed this fixture solution under a recently announced partnership.

CAMI manufactures CableEye, a highly versatile, expandable and upgradable, diagnostic and Pass/Fail check Cable and Harness Test System that’s PC-based. It’s used for assembly, prototyping, production, and QC of standard or custom wire cables and harnesses in countless applications such as Transportation, Energy, Medical Devices, Defense, Scientific R&D, Telecom, and more. The first CableEye tester was sold twenty-six years ago, and systems are now installed in thousands of locations around the world.

Doyle is a custom machine shop specializing in pogo pin (spring pin) test plugs, production connectors, and continuity testing fixtures. The products can be found on assembly lines and test stations across USA, Canada, and Mexico. Doyle has been serving the industry since 1989.

CAMI's Light Director™ system is a CableEye accessory that provides a computer-guided technique for assembling connectors used in aerospace, medical, and other high-reliability applications. This system uses LED-lit fibers to individually illuminate target cavities in the connector being assembled. When the technician enters the wire code printed on unconnected wires, or touches a wire connected at the other end, the CableEye software turns on the appropriate fiber, thereby causing a bright, flashing light to project from inside the target cavity guiding the technician to the proper insertion point. Correct insertion is confirmed by the elimination of light from that location, whereas insertion into an incorrect location leaves the flashing light visible.

Using synthetic speech, Light Director can read the pin number to the technician, further reinforcing the target location. Speech can be activated in English, Spanish, French, German, Chinese, Japanese, Korean, Polish or Turkish when a matching generic voice font has been downloaded. Speech recognition is also available as an option permitting the technician to speak wire codes to the system, thus eliminating the need for a keyboard or monitor.

Normally, technicians crimp pins on wires in advance of assembly to the connector. Wires may be identified during the assembly process by numeric code, bar code, color code, or if no codes are present, by electrical detection using a wrist-strap if the far end of the cable has already been assembled and can be electrically connected to the system. Field testing has shown that the Light Director greatly increases accuracy and assembly rate over manual methods while nearly eliminating errors. Because the Light Director greatly reduces the perceptual challenge of manually locating pin cavities in a complex connector, technician fatigue is greatly reduced, permitting a continuous, high productivity rate throughout the workday.

The new zero insertion force Light Director fixtures allow for easy and rapid connection and disconnection of the connector being assembled so even greater productivity can be achieved.  The connector simply slides into place - threaded connectors are NOT screwed onto the mating interface. Press the top of the fixture lightly to lock, and the lever to release.

Customers can order both Light Director™ (for light-guided assembly) and electrical test versions of these fixtures. The two types of blocks can be placed next to each other so that the customer can assemble on the Light Director block and then quickly move the UUT to the other for the electrical test. Or the customer can have them at entirely different stations on the production line.

Available immediately, Light Director with ZIF Light Director fixtures starts at $195. A CableEye tester with AutoBuild™ optional software is required to operate this accessory. The Light Director accessory works with all CableEye systems except the model M2U-basic.

All CableEye test systems are automation-ready and start at $1,295.