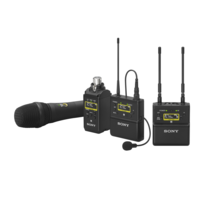 It shares audio information such as RF level meter, audio mute status and low battery alerts for the transmitters and displays them on the viewfinder. Utilizing the SMAD-P5 MI shoe, audio signals are transmitted from the wireless receiver to a connected camera without a cable connection.

The new “NFC SYNC” feature is designed for easy frequency setting. By simply holding the NFC SYNC button on the receiver for a few seconds, it automatically scans for the appropriate frequency, and allows this channel to be sent to the transmitter via ‘Near Field Communication’ (NFC).

The wireless systems’ reduced size and weight enable the mobility required for a wide range of applications, including news, remote, documentary, sports and wedding production.

For more information on this series, please visit pro.sony/products/wireless-audio/uwp-series.