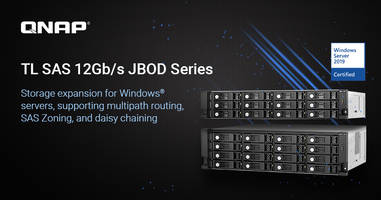 “The TL SAS JBOD is a key storage expansion solution for both QNAP NAS and Windows Server. TL SAS JBODs are easy to set up and can be managed with either the QNAP JBOD Manager utility or command line without requiring an Internet connection,” said Sam Lin, Product Manager of QNAP.

Featuring a short-depth design, the TL SAS JBOD is suitable for universal deployment. Up to sixteen expansion enclosures can be daisy-chained via high-speed mini SAS HD cables to support massive storage capacity applications.

QNAP, named from Quality Network Appliance Provider, is devoted to providing comprehensive solutions from software development, hardware design to in-house manufacturing. Focusing on storage, networking and smart video innovations, we strive to build a technology ecosystem upon subscription-based software and diversified service channels. QNAP envisions NAS as being more than a simple storage and has created a cloud-based networking infrastructure for users to host and develop artificial intelligence analysis, edge computing and data integration on their QNAP solutions.