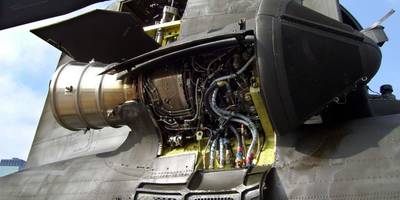 Washington, Oct. 14, 2019 /PRNewswire/ -- Honeywell (NYSE: HON) is finalizing a new and improved T55 engine to power the U.S. Army's Chinook helicopters. The newest upgrade for the legendary T55 will offer over 20% more power at sea level, a nearly 10% power increase at high and hot altitudes, and use 9% less fuel than before. This new variant of the T55 will also greatly reduce ownership costs, improving the overall value of what is already one of the most battle-tested engines in the history of warfare.

This current round of optimization and risk-reduction testing is a continuation of Honeywell's internally funded upgrade program for the T55, which has powered Chinook helicopters around the globe for more than five decades. The new T55 also represents the lowest risk to integrate onto the Chinook, as it already fits in the existing nacelle and maintains all the same connections to the aircraft.

"Honeywell is committed to continually improving the T55 engine to meet military needs and developing reliable, time-tested engines that require less maintenance and can withstand harsh environments," said Dave Marinick, vice president, engines, Honeywell Aerospace. "Our dedication in continually improving the T55 is a testament to more than five successful decades working alongside the U.S. Army to protect and serve its soldiers."

The new T55 updates do not require changes to the helicopter engine mount or engine interfaces, making the T55 engine the ideal drop-in replacement. The upgrades include advanced compressor technology, which results in more horsepower and range to continue to support the evolving heavy lift needs of the Chinook. Other benefits include reliability and maintainability improvements as well as lower engine maintenance costs. This engine upgrade will be fully compatible with the U.S. Army's existing T55 infrastructure, tooling, support equipment and organic capabilities, thus further reducing lifecycle costs compared with alternatives.

"Upgrading the combat-proven T55 is the lowest cost and lowest risk path to keeping Chinook fleets operating at maximum efficiency," Marinick said. "There is no better option for today's warfighter."

The T55 engine has been in operation on the CH-47 Chinook helicopter for nearly 57 years, with more than 6,000 T55 engines having been produced and logging some 12 million hours of operation.

"The engine is a stepping stone to what Honeywell believes could be the lowest cost, best-value offering for propulsion power for U.S. military future long-range assault aircraft (FLRAA), part of the Future Vertical Lift (FVL) Program," Marinick said.

The new offering will be available as both a new engine version and a low-cost kit to upgrade engines during overhauls. More than 1,000 Chinook engines can increase their capabilities, while simultaneously lowering operational costs.

For more information on the T55 engine upgrades, please visit Honeywell at AUSA booth #1217 in Hall A at the Walter E. Washington Convention Center.

Honeywell (www.honeywell.com) is a Fortune 100 technology company that delivers industry specific solutions that include aerospace products and services; control technologies for buildings and industry; and performance materials globally. Our technologies help everything from aircraft, buildings, manufacturing plants, supply chains, and workers become more connected to make our world smarter, safer, and more sustainable. For more news and information on Honeywell, please visit www.honeywell.com/newsroom.