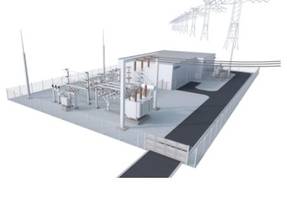 Siemen’s SVC Plus FS Frequency Stabilizer is designed with the combination of static var compensation and supercapacitor. The unit can transfer up to 200 megawatts of stored electric power to the grid at full load. The stabilizer supplies the required energy to the grid when fluctuations in voltage or frequency occur in order to prevent a power failure.

With its SVC Plus Frequency Stabilizer (FS), Siemens is the world’s first supplier to combine reactive power compensation capability with the use of so-called supercapacitors. The SVC Plus FS can feed the reactive power needed for stable grid operation in less than 50 milliseconds. At the same time, the up to 200 megawatts of electric power stored in the supercapacitors can be transferred to the grid at full load. As a result, the voltage and frequency, and thus also the grid, remain stable. This automatic procedure is triggered whenever the voltage or frequency exceeds or drops below certain limits. When fluctuations occur in a power grid, the first few seconds determine whether a blackout will occur. In such situations, a new solution developed by Siemens immediately supplies the energy needed in the necessary quantity, thus preventing a power failure. This is particularly important in power grids that are exposed to volatile infeeds, for example from increasingly more distributed and renewable energy sources.

The missing link in the energy transition

Depending on the country, the frequency of an AC grid remains at a constant 50 Hertz (in Europe, for example) or 60 Hertz (in North America, for instance) when the quantity of electricity generated and consumed is in balance. Renewable energy, however, is only available in variable quantities, depending on the sun and wind. More and more producers are feeding power locally; the distances between the power generation site – on the open ocean, for example – and the main points of consumption inland often amount to hundreds of kilometers. If a large consumer is then added or removed, the frequency in the grid, begins to fluctuate. An underfrequency occurs, for example, if the load abruptly increases or power plant capacity is suddenly absent. “In the near future, power management systems alone will no longer be able to compensate for imbalances in power grids,” says Mirko Duesel, CEO Transmission Solutions at Energy Management. “The innovative and economical SVC Plus FS solution is the missing link that can ensure the grid stability we all need in this era of transition to a new energy mix.”

Large conventional power plants have long played a key role in maintaining a power balance. With fossil fuels, the power can be increased and decreased as needed. The kinetic energy stored in the flywheels of generators, for example, can quickly equalize small deviations. The grid is in balance again within seconds. Experts call the energy stored in the generator’s rotating masses “grid inertia.” However, fewer and fewer large power plants are available to maintain the inertia. At the same time, more and more renewable energy is being fed into the grid. Stored-pump power plants can only react slowly to frequency drops. “To avoid costly outages, some power plants switch to the inefficient standby mode,” says Alexander Rentschler, Head of Product Lifecycle Management at Siemens Transmission Solutions. “The SVC Plus FS will make grid operators independent of this. The solution makes the grid more robust, increases its inertia, and thus builds a bridge for the energy transition.”

The benefits of supercapacitors

Supercapacitors store energy. Their charging mode is electrostatic, which means that electrons are moved instead of molecules. As a result, they are charged and discharged much faster than storage batteries. Siemens buys the supercapacitors from its Californian partner Maxwell Technologies and is responsible for managing the static var capacitors and supercapacitors, connecting to the grid, and integrating the system. The SVC Plus FS takes up approximately two-thirds less space in comparison with a battery storage solution at the reference power of 50 Megawatt.

Siemens AG (Berlin and Munich) is a global technology powerhouse that has stood for engineering excellence, innovation, quality, reliability and internationality for 170 years. The company is active around the globe, focusing on the areas of electrification, automation and digitalization. One of the world’s largest producers of energy-efficient, resource-saving technologies, Siemens is a leading supplier of efficient power generation and power transmission solutions and a pioneer in infrastructure solutions as well as automation, drive and software solutions for industry. With its publicly listed subsidiary Siemens Healthineers AG, the company is also a leading provider of medical imaging equipment – such as computed tomography and magnetic resonance imaging systems – and a leader in laboratory diagnostics as well as clinical IT. In fiscal 2017, which ended on September 30, 2017, Siemens generated revenue of €83.0 billion and net income of €6.2 billion. At the end of September 2017, the company had around 377,000 employees worldwide. Further information is available on the Internet at www.siemens.com.