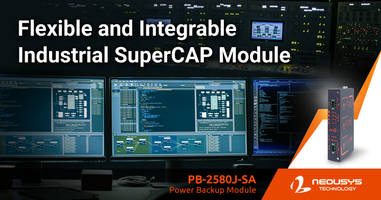 Taipei, Taiwan -- September 30th, 2021 -- Neousys Technology, an industry-leading provider of rugged embedded systems, today announced their latest intelligent supercapacitor-based power backup module, PB-2580J-SA. Being a cost-effective and industrial-grade power backup module with 2500 watt-second capacity, it can operate in harsh environments from -25 to 65°C and has a long operating life lasting up to 10 years or 500,000 charge-discharge cycles.

Inheriting the proven core competency of Neousys PB series, PB-2580J-SA features supercapacitor and patented CAP energy management technology. The supercapacitor is a high-capacity capacitor with capacitance values much higher than other capacitor types. It bridges the gap between electrolytic capacitors and rechargeable batteries. With a higher power throughput, it charges and discharges in a fraction of the time. Superior to traditional batteries, a supercapacitor-based power backup module can be used in extremely high or cold temperatures, ideal for industrial applications such as factory, outdoor, vehicle and mobile environments.

Like other PB series that come with Neousys' patented CAP energy management technology, PB-2580J-SA features a microprocessor and a supercapacitor charge/ discharge controller with proprietary firmware. The firmware embedded in the MCU monitors system energy consumption and extends the operation time for data backup during unforeseen power outages and initiates a proper system shutdown process to preserve data and avoid hardware damage. 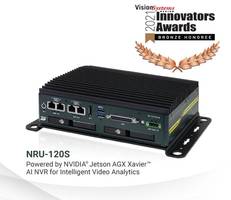