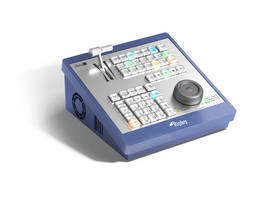 The Ripley Video Replay Server is configured with eight bi-directional HD/SD SDI-interfaces. The unit features two graphics port for main interface and multi-viewer monitors and can be used as a four-camera sports video judging unit. The Ripley comes with LTC input, an RS232/422 port, two In and Out GPO interfaces. It is offered with four SDHC memory card slots that are used for video import and export and four-channel recording is done using H.264 or AVC-Intra 50Mbit codecs.

“Ripley is another significant step that Slomo.tv is taking in making our solutions affordable and desirable for the broadest range of sports production,” said Michael Gilman, CEO of Slomo.tv. “This controller/server combo builds on the success of our Simple R and Jr. products: but in this case, our design engineers have succeeded in creating a fully functional server inside a 4.5 kg controller. This opens up a whole new world of opportunities for anybody who wants a broadcast quality slow motion instant replay server for sports and video-judging applications.”

Also, Ripley can be used as a four-camera sports video judging unit. It has two graphics ports for the main interface and multi-viewer monitors. If the operator has only one monitor available, he can easily switch between these modes using the unit’s MultiSkin function. For easy integration within wider workflows, Ripley comes fitted with LTC input, an RS232/422 port as well as two In and two Out GPO interfaces.

Another unique feature of Ripley is four SDHC memory card slots for video import and export. Four-channel recording is achieved with H.264 or AVC-Intra 50Mbit codecs. Within the server, the recorded material can be exported for NLE editing by most popular codecs including ProRes, AVID DNxHD, XDCAM 50, DVCProHD, AVC-Intro.

As standard, the server has a 1GbE networking interface for file exchange between other systems. This combo server also includes two free options – a transfer (networking) option for exchanging clips and playlists within Slomo.tv servers and a telestrator (Game Analyzer), which allows drawing on the video being played.

Slomo.tv reports that Ripley has been developed as a replay server for fly-away installations. Its robustness alongside with distinctive intuitive user interface makes it an ideal redundancy unit.

Ripley will make its European debut at IBC (booth # 8.B40). For more information, go to https://slomo.tv/en/products/

About Slomo.tv
Established in 2007, the company has successfully introduced complete lines of high quality multi-channel professional recording and instant replay products. Slomo.tv has brought to market a number of effective solutions for video production technology. Slomo.tv systems, such as Dominator and Simple R, are widely used on major TV channels, and the company’s video judging system for sports, videoReferee®, has become an integral part of many sport arenas worldwide.