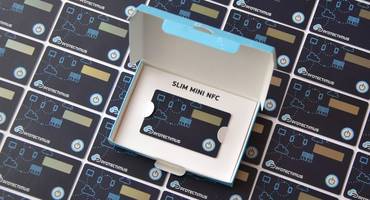 Protectimus Solutions LLP is announcing the sale of its reflashable TOTP tokens Protectimus Slim NFC featuring time synchronization. The new generation of programmable hardware tokens Protectimus Slim NFC can now have their onboard clocks resynchronized when a secret key is added. The other functionality is unchanged. All users need to set up the token is an Android smartphone that supports NFC. The new tokens with synchronization feature went on sale on May 1, 2019.

The only disadvantage of this token to date was the possibility of time drift. This problem is inherent to all TOTP tokens, without exception. TOTP tokens contain an onboard clock. Inevitably, the clock gradually gets ahead of or falls behind the actual time. Per RFC 6238, the time difference between the token and server should be monitored by the server software.

But users often don't have access to the authentication server, so Protectimus figured out a way of correcting the token's clock instead. The time will be resynchronized when a secret key is flashed to the token.

The token can be reflashed using the Protectimus TOTP Burner application. Currently, the app is available for Android only. The app scans a QR code containing the secret key and then transmits that secret key to the Protectimus Slim NFC token. As it does so, it sets the correct time. An Android smartphone used for this purpose must support NFC.

Here are some of our clients who are already using Protectimus Slim NFC OTP tokens: Middle Tennessee State University, the George Washington University, the College of Central Florida, the University of Guelph, the University of Groningen, the London Science Museum, and many other companies. These tokens are often purchased for personal use with Google, Office 365, Azure MFA, Facebook, Dropbox, Github, payment systems, and cryptocurrency exchanges.

Application for the token's setup

For more than six years, Protectimus Solutions LLP has been creating reliable products for organizing complex two-factor authentication in companies of all sizes — from startups to large corporations. All Protectimus tokens and software are certified by OATH (the Initiative for Open Authentication). The Protectimus lineup includes not only hardware and software TOTP and OCRA tokens, but also plugins for quick integration with ADFS, Citrix NetScaler and XenApp, VMware, RoundCube, SSH, RADIUS, SAML and SSO, Windows Login and Microsoft RDP, Azure, and OWA.