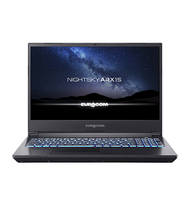 Equipped with AMD Ryzen 3000- series desktop CPU’s, the EUROCOM Nightsky ARX15 Superlaptop is Eurocom’s first laptop to feature the formidable AMD Ryzen 9 series CPUs with up to 16 cores and 32 threads. Users have the choice to configure their ARX15 Superlaptops with either the NVIDIA GeForce RTX 2070 or an NVIDIA GeForce RTX 2060, packing immense power in such a thin and light system that only weighs 2.6 kilograms. With its CPU-upgradeable, User-upgradeable and modular design, the EUROCOM Nightsky ARX15 grants users the power to ascend to brand new threshold of power.

For users who desire the maximum amount of storage space and memory/RAM in their laptops, the Nighstky ARX15 has easy-to-access, user-upgradeable storage and memory slots that can support up to a whopping 16 TB of storage data over three drives. These include an M.2 2280 SSD via PCI-Express 3.0 x4 or SATA III, one M.2 2280 SSD PCI-E 2.0 x4 as well as an added 2.5"" SSD/HDD (7 mm). The Nightsky ARX15 can also be configured with up to a massive 64GB of DDR4 RAM in order to handle even the most demanding projects and applications.

A major feature of Eurocom laptops like the Nightsky ARX15 is its modular, socketed design that allows users to keep this powerhouse laptop as cutting-edge as they desire. No matter how power users prefer to configure their EUROCOM Nightsky ARX15, they will have the utmost freedom to push limits and reach new heights, whether it is at work, in game or both.

About Eurocom:
Eurocom is the leading developer of long lifespan, fully upgradable notebooks, as well as, high-performance mobile workstations and servers since 1989. Eurocom prides itself as an Industry leader in providing ground-breaking technology and continues to engineer innovative solutions that inspire individuals and companies to new growth and development. For more information on Eurocom please visit us at www.eurocom.com