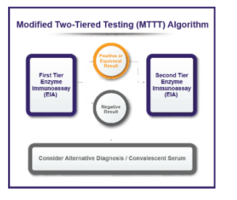 Lyme disease, caused by the bacterium Borrelia burgdorferi, is the most common vector-borne disease in the United States and is transmitted to humans through the bite of infected blacklegged ticks. Cases of Lyme disease have almost tripled since the 1990s to more than 300,000 annually(2) and have been found in all 50 states(3). The number of cases in Europe is also on the rise(4).

Serological evidence of exposure is an important aid in the diagnosis of Lyme disease. The Standard Two-Tiered Testing (STTT) algorithm for the serodiagnosis of Lyme disease was devised by attendees of the Second National Conference on Serologic Diagnosis of Lyme Disease (Dearborn, MI) in 1994(5). For 25 years, there have been no significant changes to this algorithm even though several issues with the current STTT algorithm exist, including low sensitivity in the early stages of disease(6) and false positive results associated with IgM immunoblots(7).

Chris Howard, Chief Commercial Officer at ZEUS Scientific remarked, “With nearly 30% of early Lyme disease cases being potentially missed by the current STTT algorithm due to the insensitivity of immunoblot tests(8), we are ecstatic to have successfully improved one of the most challenging aspects of diagnosis: detecting the disease early, before a robust immune response has been developed by some patients.” Howard continued, “Our ZEUS Borrelia MTTT™ algorithm detected up to 30% more acute Lyme disease cases relative to the STTT, significantly reducing the number of missed clinically positive patient samples(1) while maximizing lab efficiency with fully automatable immunoassays.”

The STTT algorithm uses a first-tier immunoassay with equivocal or positive specimens subsequently tested by an immunoblot. Clinical laboratories have been burdened by the complexities and subjectivity of immunoblot testing for years, often needing to send these tests out to reference labs, leading to longer turnaround time for test results, increased resource allocation and higher costs.

“We envisioned a similar MTTT concept more than ten years ago, but were unable to convince regulators of this powerful concept at that time(10). Since then, many other accomplished researchers have repeatedly demonstrated that the MTTT algorithm is clinically more sensitive, yet equally as specific as the STTT algorithm.” stated Mark Kopnitsky, Chief Scientific Officer of ZEUS Scientific. “We are thrilled that we can finally offer this MTTT algorithm to the clinical laboratories and hope to improve their ability to detect cases of early Lyme disease.”

“The prevalence of Lyme disease is growing and is difficult to diagnose early, at a time when patients need it most,” stated Scott Tourville, Chief Executive Officer of ZEUS Scientific. “This testing paradigm shift is a successful response to longstanding clinical and workflow challenges in the laboratory. I am extremely proud of our research and clinical trial teams in making the promise of MTTT a reality. Labs gain fast, accurate results through an efficient protocol, doctors gain higher confidence in diagnostic assessment, and patients achieve better care with appropriate diagnosis.”

Learn more about ZEUS Borrelia MTTT™ and complete line of FDA-cleared tests for Lyme disease at zeuslyme.com. For information on the company’s extensive line of infectious and autoimmune disease tests, visit http://www.zeusscientific.com or e-mail sales(at)zeusscientific(dot)com. To speak with a ZEUS Scientific Account Manager, call 1-800-286-2111 or (908) 526-3744.

ZEUS Scientific is your first choice for high-performing, easy-to-use clinical diagnostic solutions. Our products are designed and manufactured to ensure optimal efficiency and accurate diagnosis to facilitate better patient care. ZEUS Scientific is based in Branchburg, New Jersey and markets test systems around the world through a direct sales team in the U.S. and Canada and an extensive international distribution network. ZEUS complies with the international standard ISO 13485 (2016), Health Canada Medical Device Regulations (SOR/98-282, May 7 1998), the FDA Quality System Regulations (FDA Quality System Regulation, 1996: 21 CFR § 820), and the IVD 98/79/EEC.