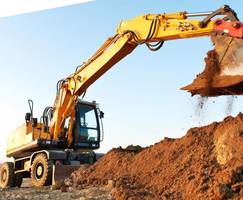 MAUMEE, Ohio, July 18, 2018 /PRNewswire/ -- Dana Incorporated (NYSE: DAN) today announced that the company has been collaborating with Mecalac to develop a customized e-Drivetrain system for the new Mecalac e12 electric compact wheeled excavator. This vehicle earned the Energy Transition Award earlier this year as part of the 2018 Intermat Innovation Awards.

With the proven Mecalac 12MTX as a base frame, this version is the world's first compact wheeled excavator powered entirely by electricity. Featuring Spicer® 112 axles and a Spicer 367 shift-on-fly transmission, the Mecalac e12 wheeled excavator delivers the range, performance, and compact size required to support modern urban construction sites.

"As the European construction market embraces the trend toward zero-emission standards for small to mid-sized vehicles, our customers are demanding great strides in efficiency while also requiring reliable performance," said Jean-Baptiste Rousseau, technologies manager at Mecalac. "Dana was able to adapt the 12MTX drivetrain to add electric drive capabilities within our existing vehicle architecture. With their technical expertise and open collaboration, we developed an optimal solution and accelerated the delivery of this vehicle to market."

With an eight-hour working range, the engine compartment in the Mecalac e12 houses LiFePO4 battery technology – lithium iron phosphate for service life that is three times longer than classic batteries. The batteries can be charged in approximately seven hours.

Dana has a long history of developing drivetrain systems for hybrid and electric vehicle architectures. The company also offers patented battery and electronic cooling technologies, along with fuel-cell technology. In addition, Dana engineers had extensive experience with this particular application because the diesel-powered version of this vehicle also features Spicer drivetrain components.

"As a Tier-One supplier, we understand that the success of electrification in the off-highway industry is driven by performance. These technologies must support a smooth transition to fully integrated electric-drive technologies optimized within a single package, providing both electrified and conventional powertrain options," said Aziz Aghili, president of Dana Off-Highway Drive and Motion Technologies. "Dana's support for new energy vehicles has been considerable, and growing every year, as the importance of engineering for hybridization and electrification is further elevated throughout the industry."

Dana is leveraging a wide portfolio of technologies for off-highway customers to offer dozens of successful electrified driveline applications in production and pre-production testing. To learn more, visit www.dana.com/offhighway.

Dana is a world leader in highly engineered solutions for improving the efficiency, performance, and sustainability of powered vehicles and machinery. Dana supports the passenger vehicle, commercial truck, and off-highway markets, as well as industrial and stationary equipment applications. Founded in 1904, Dana employs approximately 30,000 people in 33 countries on six continents who are committed to delivering long-term value to customers. The company reported sales of more than $7.2 billion in 2017. Based in Maumee, Ohio, the company's operations in Northwest Ohio and Southeast Michigan were selected as a Top Workplace for the last two years by The (Toledo) Blade and its research partner, Energage. Dana is ranked among the Drucker Institute's listing of the 250 most effectively managed companies. For more information, please visit www.dana.com.