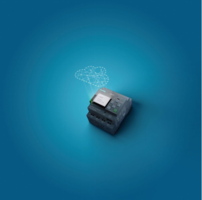 Siemens is presenting the new version of the logic module series Logo! for the first time at Hannover Messe 2020: The latest Logo! Version 8.3 will be available from Fall 2020 and features a direct cloud connection. The Logo! Soft Comfort engineering software is getting a functional update to enable configuration of the new devices. With Version 8.3, it is possible to activate and configure the cloud connection and use the new free Logo! web editor to create user-defined website and dashboards in the cloud. Users can also design their automation projects and operate them from the cloud via smartphone, tablet or PC. The webserver can be directly hosted in the cloud, enabling individual visualization and centralized control of switching and automation solutions in building management systems, and in the construction of control cabinets, machines and apparatus – comfortably, regardless of the location. Users now have even more options for simple networking.

Through the encrypted connection from the cloud to Logo! 8.3 via the TLS protocol, a secure data transfer is carried out in both directions, i.e. read and write.

The cloud connectivity of the new logic modules represents a paradigm shift. Whereas previously the Logo! had to be interrupted for data handling or acquisition purposes, real-time access in the cloud makes it possible to access all data during operation. At the first level, Logo! 8.3 enables Amazon Web Services (AWS) to be connected to the cloud. And there are plans for more connections, such as to MindSphere, the Siemens cloud-based, open IoT operating system, and Alibaba.

Thanks to the multiple interfacing options such as Modbus TCP/IP, Konnex bus (KNX) and Ethernet, Logo! 8.3 can also be used as a cloud gateway for existing systems. This enables data to be exported to the cloud, for example, because memory space in the controller is limited. In this way, the entire data of smaller automation projects is available in the cloud for further processing and analysis, resulting in new possibilities for the automation engineer to record and evaluate energy data, carry out predictive maintenance or implement flexible service concepts.

For 20 years now, the logic module Logo! has enabled the easy implementation of small automation projects. It was in 1996 that Siemens launched the "Logo!" logic module for universal use, thereby introducing a new class of devices for electrical engineering. It was designed for performing small switching and control tasks in building automation, and in the construction of control cabinets, machines and apparatus. It was also intended to replace conventional technology that was still frequently being used, facilitating functions such as contactor relays, time-delay relays, switch clocks, latching relays, current surge relays and counters. Since then, the range of functions has been continually expanded, and the performance improved. Whereas the first generation had a 30 block memory capacity, for example, the current Logo! 8.3 version now features more than 400 blocks. And Ethernet communication with up to sixteen connections has also become standard, so that today the microcontroller is now an established technology in the market, occupying a position conventional controls and powerful automation engineering with controllers such as Simatic. Logo! is easy to install with minimal wiring effort and user-friendly programming. Logo! saves space in the control cabinet and takes over the functions of conventional time-delay switches, time relays, counters and auxiliary relay functions. Extended functions such as PI (proportional integral) control and data logging are also easy to implement.

Siemens AG (Berlin and Munich) is a global technology powerhouse that has stood for engineering excellence, innovation, quality, reliability and internationality for more than 170 years. The company is active around the globe, focusing on the areas of power generation and distribution, intelligent infrastructure for buildings and distributed energy systems, and automation and digitalization in the process and manufacturing industries. Through the separately managed company Siemens Mobility, a leading supplier of smart mobility solutions for rail and road transport, Siemens is shaping the world market for passenger and freight services. Due to its majority stakes in the publicly listed companies Siemens Healthineers AG and Siemens Gamesa Renewable Energy, Siemens is also a world-leading supplier of medical technology and digital healthcare services as well as environmentally friendly solutions for onshore and offshore wind power generation. In fiscal 2019, which ended on September 30, 2019, Siemens generated revenue of €86.8 billion and net income of €5.6 billion. At the end of September 2019, the company had around 385,000 employees worldwide. Further information is available on the Internet at www.siemens.com