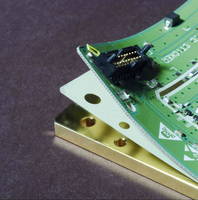 The LOCTITE® ABLESTIK® CF 3366 Assembly Film maintains adhesion strength up to temperatures as high as 175°C and has a curing capability at temperatures as low as 125°C. The product is suitable for aircraft, unmanned aerial vehicles (UAVs), communications and cybersecurity infrastructure applications. The film can be cut into complex shapes and patterns to accommodate any assembly dimensions. It exhibits high thermal and electrical conductivity with increased heat dissipation capabilities.

“Over the past decade, electronic parts have become smaller, more complex and higher functioning,” says Doug Katze, Global Market Segment Manager Defense & Aerospace for Henkel. “Miniaturization is happening across the board – not only in the well-known consumer and handheld markets, but also in sectors such as aerospace and automotive, pushing the limits of already harsh environments. Our new assembly film accounts for these dynamics, delivering excellent adhesion performance at very high temperature.”