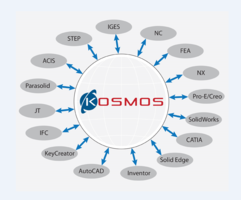 Marlborough, MA — August 28, 2019 — Kubotek3D, developer of 3D mechanical computer-aided design (MCAD) software, announced today that the Kubotek Kosmos 3D framework has been updated to version 2.0. The Kubotek Kosmos framework is a set of advanced, multi-platform C/C++ software components which maximize a program’s performance and ability to work with complete engineering models and data from all major MCAD databases. The product supports software developers building precise 3D applications which need to work with engineering models and data.

“For the 2.0 release Kubotek Kosmos has been significantly re-packaged to better support two distinct groups of developers. The first group only needs to read precise engineering data and the second group also needs editing or geometry creation,” said Ram Eswaran, CTO of Kubotek3D.

Kubotek Kosmos 3D framework 2.0 also sees meaningful performance improvements in generating intersection slice profiles between a model and a series of parallel planes. This slicing function, of special interest to users because of its need in additive manufacturing, is an application in which Kubotek Kosmos performance stands out from other modelers due to its unique un-constricted support for multi-threaded processing.

Kubotek3D develops mechanical CAD software and core precision 3D technologies that facilitate interoperability between CAD programs. This strategy allows geometry, no matter where it originated, to be used throughout the manufacturing supply chain to speed time to market, reduce costs and improve quality. Kubotek3D is a division of Kubotek USA, Inc., a wholly owned subsidiary of Kubotek Corporation (7709.T Tokyo Stock Exchange). Kubotek Corporation was founded in 1979 and is headquartered in Osaka, Japan. For more information see www.kubotek3d.com.

Kubotek Kosmos is a registered trademark of Kubotek Corporation.