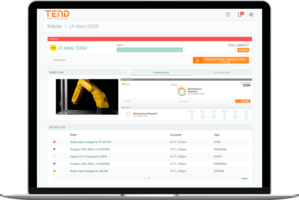 The In.Advance™ Predictive Maintenance Software allows manufacturers to address potential robot failures before they cease production. The software features intuitive browser dashboard with SMS and email alerts for diagnosing failures and restoring production. The In.Advance™ comes with edge device inside each robot cell that processes ongoing data from the robot for anomalies and indicates failure. The software enables the maintenance teams to quickly identify problem and fix it before the occurrence of failure.

Automotive and appliance suppliers use In.advance™ software from Tend to reduce unforeseen robot failures by up to 60%. U.S. manufacturers could save $58+ Billion in downtime costs per year.

Tend announces the immediate availability of the first “smart” predictive maintenance system for industrial robots, In.advance™. Based on a proprietary machine-learning engine running in the factory, In.advance™ uses anomaly detection to allow manufactures to address potential robot failures before they hinder or cease production. Some unique attributes of In.advance™ include:

Unlike more costly systems that require vast amounts of robot data to be sent outside the firewall and/or to massive data centers to be processed and analyzed for potential predictive signals, Tend.ai’s Smart Predictive Maintenance deploys an “edge” device inside each robot cell to self-learn the robot’s “normal” operational parameters. This device locally processes the ongoing data from the robot for anomalies that indicate potential failures, sending alerts via SMS or Email that pinpoint not only which robot is having an issue, but also which component inside the robot is showing signs of failing health. Maintenance teams can then immediately identify the problem and fix it before an actual failure occurs.

“Tend’s approach is elegantly simple yet immensely more effective,” said Chris Daniels, President of Camtech Manufacturing Solutions, a leading Robot Systems Integrator. “We’ve installed In.advance™ at some of the largest automotive suppliers,” Chris added, “Tend’s local anomaly detection, based on the unique behavior of a single robot, can have a remarkably better success rate at predicting failure than competing systems that compare data from thousands of different robots. That ‘needle in the haystack’ approach used by other systems is flawed as most robots are running very different tasks in environments that are equally varied. Comparing those different data-sets is often inconclusive.”

“This is the next generation of predictive maintenance systems,” said Steve Sickler, President at Tend. “Thanks to pioneering Machine-Learning work by Google and Amazon, it is now possible to deploy advanced algorithms on small, yet powerful, compute devices that can detect anomalies locally. Robots generate vast amounts of data hourly; it is costly and simply irresponsible to send all that data outside of your factory for security reasons. Using modern machine-learning and the latest compute devices, we keep it all within the factory, sending out only time-sensitive alerts as required.”

In.advance™ is one component of Tend’s first “robot agnostic” platform. “Robot manufacturers already struggle to provide modern software for their own robots as it is not their core competence,” Mr. Sickler added. “Providing great software for their competitors' robots is just unrealistic. With In.advance™, companies can standardize on the Tend platform for a holistic view of all of their robot maintenance issues and priorities across the major brands of industrial robots.”

Tend has deployed their smart factory performance optimization software suite at some of the largest automotive and appliance manufacturers via a nationwide network of certified system integrators. Learn more at tend.ai.