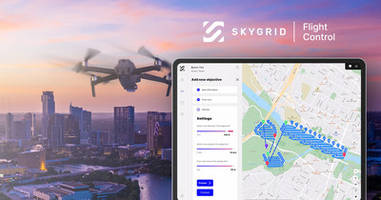 "Traditionally, drone operators have used several different tools to check airspace, get LAANC, plan and execute flights, and gather insights, but it's a manual, cumbersome process," said Amir Husain, CEO and founder of SkyGrid. "Recognizing this challenge, SkyGrid has minimized the burden on drone operators by creating one solution that automates airspace, flights, and insights. As the only drone solution built on AI and blockchain technologies, we give operators and enterprises the assurances they need to execute safe, compliant missions."

"SkyGrid Flight Control is an important stepping-stone to enable more complex commercial drone operations and advanced air mobility in urban, regional, and global markets," said Steve Nordlund, vice president and general manager of Being NeXt and executive board advisor of SkyGrid. "SkyGrid is solving complex problems in unmanned aviation with a system that will safely integrate the future volume of drones, passenger air vehicles, and other autonomous aircraft in the global airspace."

Download SkyGrid Flight Control today in the iPad App Store or visit the SkyGrid website for more information about the advanced enterprise features.

About SkyGrid
SkyGrid, a Boeing, SparkCognition company, is powering the next generation of aviation. As the only airspace management system built on AI and blockchain, SkyGrid is solving the industry's biggest challenges integrating unmanned aircraft in the global airspace and executing autonomous operations. SkyGrid's AerialOS™ monitors, predicts, and adapts to changes in airspace traffic, environmental conditions, and vehicle health to intelligently route, synchronize, and manage unmanned aircraft. Based in Austin, Texas, SkyGrid is enabling a wide variety of commercial drone operations from package delivery to emergency assistance.