The e-Series Collaborative Robots are available in UR3e, UR5e and UR10e models. The units are offered with built-in, tool-centric force/torque sensor used for measuring mass and inspecting processes. UR3e and UR5e arms offer 0.03 mm repeatability whereas the UR10e provides 0.05 mm. The externally accessible 500 Hz system bus allows user to implement complex motion control algorithms or profiles. The cobots are suitable for applications where force-feedback is important such as sanding, buffing, polishing and deburring.

With a new built-in, tool-centric force/torque sensor, the e-Series is ready to take on popular collaborative robot applications that require force control right out of the box such as sanding, buffing, polishing and deburring where force-feedback is paramount in order to obtain uniform results. Additionally, the force/torque sensor can be used to measure mass and perform inspection processes or precisely detect contact. Increased repeatability of 30 microns (0.03mm) in the UR3e and UR5e models and 50 microns (0.05mm) in the UR10e makes the new cobots suitable for precise finishing, assembly and electronics tasks.

The user interface now also includes the ability to program stopping time and stopping distance for protective stops. This unique feature, not found on any other collaborative robot, greatly reduces the complexity and uncertainty involved in performing pre-deployment risk assessments. All 17 safety functions are certified by TÜV Nord and comply with the latest ISO machinery safety standards for unobstructed human-robot collaboration.

The ‘e’ in e-Series stands for Evolution and underpins Universal Robots’ key vision of Empowering People and making it Easy for Everyone. “End-users with complex applications and diverse or uncertain future needs will benefit from the e-Series platform and our unique UR+ ecosystem knowing that their investment will be able to grow with them as their needs change,” says Shepherd, referencing the rapidly expanding portfolio of certified UR+ plug & play end-effectors, software and peripherals certified for UR cobots now available.

As the catalog and capability of UR+ products grow so has the need for increased tool power consumption. To address this emerging need the e-Series platform tool power supply now supports up to 2A of peak current. The new cobot line also adds four additional digital inputs with an associated interface for use with conveyor tracking. A new wrist-joint-tool communication interface reduces production line integration time and the hassle associated with routing cables between the end-effector and control cabinet. All joints are field replaceable in under six minutes. “The global cobot market is the fastest-growing segment of industrial automation. The e-Series will continue to propel this class of robots forward into new applications in small machine shops and large enterprises alike. I look forward to introducing the IMTS audience to the e-Series experience,” says Shepherd.

Universal Robots will start taking orders for the e-Series immediately and plans to begin shipping units to customers from August 1, 2018. IMTS will be the first opportunity in North America to experience the e-Series live.

Universal Robots was co-founded in 2005 by the company’s CTO, Esben Østergaard – the 2018 Engelberger Award Winner – who wanted to make robot technology accessible to all by developing small, user-friendly, reasonably priced, flexible industrial robots that are safe to work with. Since the first collaborative robot (cobot) was launched in 2008, the company has experienced considerable growth with the user-friendly cobot now sold worldwide. The company, which is a part of Teradyne Inc., is headquartered in Odense, Denmark, and has subsidiaries and regional offices in the United States, Germany, France, Spain, Italy, Czech Republic, Turkey, China, India, Singapore, Japan, South Korea, Taiwan and Mexico. In 2017, Universal Robots had a revenue of USD 170 million. For more information, please visit www.universal-robots.com or read our blog at blog.universal-robots.com. 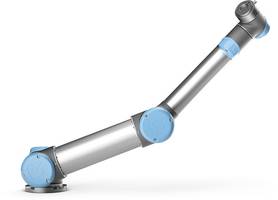 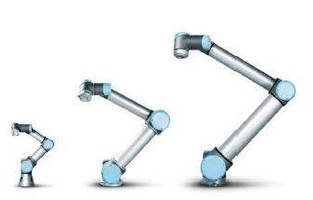 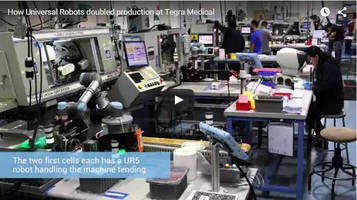