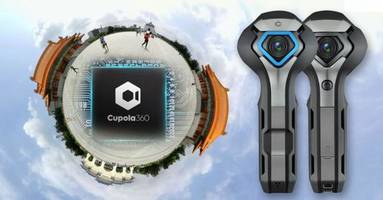 The Cupola360 as the handheld product is called, does not require an external computer or mobile phone to process its images. The custom SoC seamlessly performs in-camera stitching process joins the six images together, supporting Wide Dynamic Range and Hyper-WDR to instantly balance brightness and colour across the entire 360-degree image or video. The system adjusts levels to ensure exceptional clarity and sharpness, without washed-out or underexposed areas.

The custom-designed hardware is able to achieve extremely low power consumption, allowing 90 minutes recording time for 4K video. For video and image storage in the camera, MicroSD cards up to 2TB are supported. A USB connector allows for battery charging and provides an additional data transfer option.
Aspeed Technology- www.aspeedtech.com