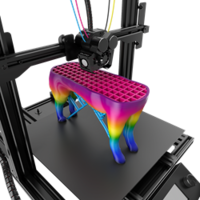 M3D, LLC today begins a new era of color 3D printing with the launch of its Crane Quad 3D printer. Designed for enthusiasts and starting at $399, Crane Quad is the industry’s first multi-material desktop 3D printer that can produce true multi-colored objects in more than 50,000 colors.

M3D, LLC, the top U.S. manufacturer of 3D printers, begins a new era of color 3D printing today with the launch of its Crane Quad™ 3D printer. Designed for enthusiasts, Crane Quad is the industry’s first multi-material desktop 3D printer that can produce true multi-colored objects. Building on M3D’s legacy of innovation in creating affordable and easy-to-use technology products that inspire consumers to make and create things, pricing for Crane Quad starts at $399.

“Our new Crane Quad desktop 3D color printer is a real breakthrough in 3D printing capability and affordability,” said Michael Armani, co-founder and CEO of M3D. “Its ability to print multiple colors and multiple materials simultaneously is a first, and it takes us one step closer to 3D printers being able to produce real-world objects that outperform traditional manufacturing, both in cost and performance.”

Historically, filament-based 3D printers have been limited to extruding with only one material at a time, which requires users to make complex hardware modifications or to manually guide different materials between layers to get even a few colors in a print. Thus, full-color prints are typically outsourced to services that lease expensive, industrial 3D color printers.

Through Crane Quad’s innovative technology, users can now print more than 50,000 colors by mixing up to four colors of standard 1.75 mm filament. From common base colors, users can create numerous color palettes covering most of the color spectrum. The base colors needed are CMYK: cyan, magenta and yellow with black, white or transparent as keys. In addition, Crane Quad allows users to print objects in any single color without the cost of owning dozens of traditional filament spools, and allows the physical characteristics of different materials to be fused into a single object with new properties.

“Just as M3D started the home 3D printing revolution in 2014, today we continue to drive the evolution of consumer color 3D printing with the introduction of Crane Quad,” said Armani. “For M3D, this launch is not just about introducing groundbreaking innovation – it represents our company’s commitment to the full-color 3D printing movement, and our dedication to providing consumers with the tools to get closer to the widespread on-demand use of 3D printed products that we know is the future.”

According to research by 3D Printing Industry, the total number of desktop 3D printers sold has nearly tripled over the past three years, with more than 500,000 units sold in 2017. Annual sales are projected to pass one million units by 2020, and surpass more than 100 million units by 2030. In addition, the research indicates that this growth is generally attributed to the availability of sub-$500 3D printer models, an overall improvement in quality, and the rapid increase in quality 3D printable content.

Crane Quad features an all-new QuadFusion™ 3D Print Head, which enables the printer to print and blend four filament colors. A first-of-its-kind, this direct-drive extruder can mix both colors and material type of most 1.75 mm filaments. The head is equipped with four motors, three fans, and a 0.35 mm mixing nozzle.

Crane Quad also includes a new open-source controller board, called the Duet 2 Maestro, which was co-designed and made in partnership with Duet3D. The board features five-axis motion control with unprecedented 256 microstep resolution, 120 MHz Atmel/Microchip ARM processor, and micro USB and micro SD card ports. Its Ethernet connectivity enables a user-friendly webhost interface, which works natively on any web-enabled device.

In addition to Crane Quad, M3D is also launching two other Crane configurations: Crane Dual™ and Crane Bowden™. All Crane series printers are equipped with the Duet 2 Maestro control board. Crane Dual’s configuration is direct-drive and includes a compound mixing nozzle, which enables mixed filament colors or mixed materials as well as independent printing of materials within a mode (i.e. different support vs. wall material). Crane Bowden is the foundational base model of the Crane 3D printer series and it has the same set of features and specifications as Crane Dual and Crane Quad, with the exception of the Bowden-style, single filament extruder.

Pricing for the Crane 3D printer series begins at $199 through the pre-order campaign. The first batch of orders is expected to ship in August.

Every Crane 3D color printer is tested for quality and reliability, shipped fully assembled, backed by a six-month warranty and supported by a U.S.-based team.

To learn more and order Crane Quad and the Crane series of 3D printers, visit https://store.printm3d.com/products/crane-3d-printer

About M3D, LLC:
M3D, LLC is a technology innovation company dedicated to making technology products more attainable to consumers and businesses through original solutions. Since its inception in 2013, M3D has released seven 3D printer models: the consumer-friendly cubed Micro, its upgraded Micro+ version, the more advanced Pro, the commercial-grade Promega, Crane Quad, Crane Dual and Crane Bowden. It also produces its own line of 3D Ink filaments, including Tough, ABS-R and Carbon Fiber. Created by passionate engineers and artists, all of M3D’s products are designed, assembled and supported in America. Headquartered in Maryland, M3D is the No.1-selling 3D printer manufacturer in the U.S., selling tens of thousands of printers annually worldwide. The company has raised more than $6.2 million through crowdfunding and holds the Kickstarter record for the most money raised for a 3D technology product. To learn more, visit https://printm3d.com and follow on Facebook: https://www.facebook.com/Micro3DPrinter.