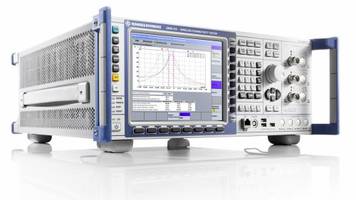 The R&S CMW platform of Bluetooth® testers already support the new Bluetooth® Low Energy (LE) version 5.2 power control test routines. These are the only T&M instruments that measure all specified RF tests up to Bluetooth LE 5.0 via the air interface. This unique solution has already been submitted to the Bluetooth® SIG for the specification of a new Bluetooth LE test mode.

The Bluetooth Special Interest Group (Bluetooth SIG) adopted the first specifications for BLE 5.2 at the end of 2019. This initially concerns the new power control functions. Rohde & Schwarz has already integrated specified tests into the Bluetooth test software of its wireless testers in the R&S CMW platform. In addition, Bluetooth LE 5.2 will provide extended audio functions similar to those of Bluetooth Classic. As soon as the specifications have been finalized, Rohde & Schwarz will expand the functional range of its Bluetooth testers accordingly.

The new test mode is based on the R&S CMW platform of wireless communications testers from Rohde & Schwarz and is suitable for measurements during development, production and in test chambers. As an additional highlight for developers, the R&S CMW measures the bit error rate (BER) of a transmission in Bluetooth LE receivers in addition to the specified packet error rate (PER).

The R&S CMW can perform all Bluetooth RF conformance tests – from Bluetooth Classic to Bluetooth LE and Bluetooth 5.2. It can also perform a multitude of audio tests on Bluetooth basic rate/enhanced data rate (BR/EDR) connections.

Testing of other wireless technologies

The R&S CMW500, R&S CMW290 and R&S CMW270 wireless testers are also suitable for testing other wireless technologies. With 160 MHz measurement bandwidth, they can test all RF parameters specified in all IEEE 802.11a/b/g/n/ac standards, including 802.11ax. The testers can also perform RF tests on Zigbee components for smart home applications.

To experience live at embedded world 2020

Rohde & Schwarz will showcase the new power control test routines and the new Bluetooth LE test mode at the embedded world 2020 in Nuremberg from February 25 to 27, 2020. Join the presentation at embedded world Conference on Wednesday 26, from 2 p.m. to 2.30 p.m. or visit the Rohde & Schwarz booth in hall 4, booth 4-218. Further information is available at http://www.rohde-schwarz.com/ble-testing.