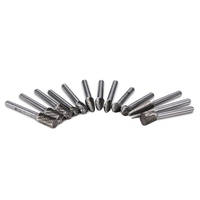 Islandia, New York -- March 29, 2022 -- After a successful launch of their line of nylon wire abrasive products in Q4 of 2021, the product development team at Empire Abrasives is following up with a whole new offering, introducing a line of carbide burrs.

Empire’s goal was to carry only the most durable burrs with consistent cutting action.

Uneven and irregular cuts to the flutes of the burrs during manufacturing lead to inconsistent grinding and heavy vibration for the end user. To avoid those negative aspects, Empire Abrasives only accepted the highest quality manufacturing standards. Thus, each burr available utilized 5-axis CNC machines to grind their flutes, creating precise and uniform grinding surfaces across all of their burr heads.

Headquartered in Long Island, New York, Empire Abrasives is an industry leading distributor of premium industrial abrasives from around the world. Using an elite team of sourcing experts, Empire Abrasives is able to secure products from some of the world’s top manufacturing facilities. Empire selects suppliers that produce only the highest quality, economically priced abrasives that cater to metalworking professionals and do-it-yourselfers alike. We pride ourselves in providing our customers with top of the line abrasives at exceptional prices through an easy to use online platform.