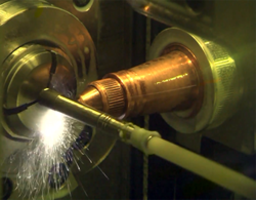 Tsugami’s B0125-III LaserSwiss 5-Axis CNC Machine Tool is offered with laser watts ranging from 200 W to 500 W and is integrated with SPI laser cutting system. The unit comes with a gas box that is capable of switching between two assist gases. The B0125-III can be used as a traditional Swiss style lathe using guide bushing or operated with an optional chuckler kit. The FANUC 0i-TF control is used for programming and driving the machine operations and comes with adjustable pulse width, frequency, lens focus and nozzle standoffs.

Tsugami LaserSwiss announced today that it will introduce an all new LaserSwiss CNC machine tool at the International Manufacturing Technology Show (IMTS) at McCormick Place in Chicago September 10th through September 15th. This is the first time the company has publicly displayed this machine model.

The new LaserSwiss is a next generation Precision Tsugami B0125-III. The 12 mm, 5-axis Swiss style CNC lathe with a fully integrated SPI laser cutting system is the only one of its kind. “We don’t know of anyone else offering a 12 mm machine that combines Swiss turning and laser cutting within a fully integrated operating platform,” Tsugami LaserSwiss Business Development Director Dan Walker said.

All laser operations are programmed and driven from the machine’s FANUC 0i-TF control and the laser’s power, pulse width, frequency, lens focus and nozzle standoff are on-the-fly adjustable. The machine is equipped with a gas box capable of switching between two assist gases, which are typically nitrogen, oxygen and argon.

The machine has 10 tool positions in addition to the laser and it is convertible, meaning it can be run as a traditional Swiss style lathe using a guide bushing or operated with an optional chucker kit, which can be installed in minutes.

“This machine offers tremendous flexibility,” Walker said, “but it’s not overly complicated. It’s a straightforward, simple machine that’s very easy to program and use.” Of the nine Tsugami LaserSwiss machines on the market, the B0125 is the most affordable, he added, and its small footprint of roughly 20 square feet makes it especially suitable for shops with limited floor space.

The LaserSwiss on display at IMTS will have a 200W laser, but customers can order Tsugami LaserSwiss machines with laser watts ranging from 200W to 500W depending on their preference and model selection. The SPI laser units are rated to last 500,000 hours without service. “It’s like having a very fast, very precise cutting tool that never gets dull,” Walker said.

IMTS visitors can see LaserSwiss cutting demonstrations on the Tsugami/Rem Sales booth (#339410) in the South hall throughout the duration of the show.