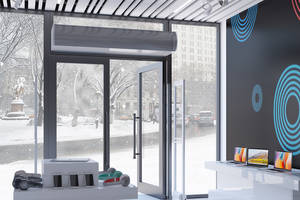 Good news for building owners, engineers/architects and HVAC contractors; Will save energy, construction costs and space in commercial facilities.

Doorway air curtains were approved June 25 as alternatives to vestibules on most commercial building entries in the upcoming ASHRAE Standard 90.1-2019 “Energy Standard for Buildings Except Low Rise Residential Buildings.” The professional association’s approved addition requires that the air curtain performance be tested in accordance with ANSI/AMCA Standard 220 to ensure it provides a minimum 400-ft/min. airstream velocity at the floor.

The approval is good news for retail, healthcare, hospitality, office and other facility owners, because they can now opt to forego the expense of vestibules in new construction, or repurpose significant square footage for more productive uses by retrofitting existing vestibules. Consulting engineers and architects, who previously were hesitant to supplant vestibules with air curtains due to inconsistent code language, now have the support of ASHRAE Standard 90.1-2019 which will be published this Fall. Furthermore, HVAC contractors will see a spike in air curtain installations to accommodate facilities looking to prevent energy loss through their main entries and meet building codes. Air curtains also protect against the infiltration of outdoor air, fumes, flying insects, wind and dust through open doorways, and contribute to occupant air comfort.

Decades ago, two-door vestibules were code-mandated to save building energy. Theoretically they created an air lock as one door would open and close before the second door opened. However, the emergence of automatic door opening sensor requirements, smaller space-saving dimensions and other infringements on vestibule effectiveness, helped make air curtains an attractive energy saving alternative. On average, air curtain-protected doorways were proven to save total building energy usage by a factor of 0.3 to 2.2-percent more over that of vestibules, according to Wang’s studies. This illustrates they’re equal or more effective at separating outdoor and indoor environments regardless of door opening styles or cycles.