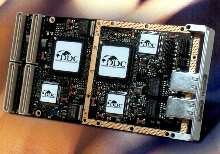 The FC-75000 series of conduction cooled Fibre Channel NICs operate over a wide -40 to +85 degrees C temperature range and is initially available with a transformer coupled copper interface with either front panel connection, PMC rear connection or a fiber optic interface. DDC supplies software drivers for VxWorks and plans to support other software operating systems later this year.

"DDC is paving a transition path from older and slower bus technologies to new high speed network technologies with its introduction of FC-AE-1553 protocol available in the Fibre
Access series of products" says Amir Massumi, Director of Marketing at DDC. "The FC-AE-1553 protocol is designed to allow re-usability of legacy system software, legacy buses and
existing avionics boxes that gave the solidly deterministic performance of MIL-STD-1553 and add the high data rates, low latency and enormous network size capability of Fibre Channel".

Data Device Corporation is an international leader in high-reliability data conversion interface components and subsystems for military, commercial, and industrial applications. Established in 1964 with the introduction of the first synchro-to-digital module, DDC has design and manufacturing facilities in their Bohemia, New York headquarters and Cork, Ireland. For more information, contact Todd Decker at 631-567-5600 ext. 742:2, e-mail infocddc-web.com, or connect to www.ddc-web.com
Share