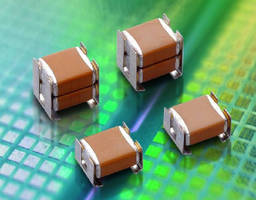 To minimize acoustic noise and cracks caused by PCB flexure, KRM Series features external metal terminals, which lift body up to 1 mm above surface of PCB when mounted, ensuring that bending forces are not transmitted between PCB and capacitor. Design allows 2 capacitors to be mounted on top of each other, doubling effective capacitance. Models range from 47 ÂµF unit measuring 6.1 x 5.3 x 6.4 mm with 25 V rating to 10 ÂµF version measuring 6.1 x 5.3 x 4.8 mm with 100 V rating.


Hoofddorp, Netherlands: Murata has developed a series of MLCCs with a unique external metal terminal design which reduces problems associated with mounting larger size MLCCs, including acoustic noise production and cracks caused by flexing the PCB. The construction of this series, the KRM series, also allows two capacitors to be mounted on top of each other, doubling the effective capacitance to achieve very high capacitance values inside small footprints. Additionally, this series outperformed traditional MLCCs in heat shock cycle tests.

With a traditionally mounted capacitor, when a PCB is subject to bending forces this causes mechanical stress in the capacitor and solder joints which leads to cracking. Also, when subject to AC voltages, ceramic capacitors can change their shape and exert a cyclic bending force on the PCB which causes acoustic noise. The new KRM series features ferric alloy terminals which lift the body of the capacitor up to 1mm above the surface of the PCB when mounted, helping ensure that bending forces are not transmitted between the PCB and the capacitor and vice versa, avoiding the problems described above.

In tests, a KRM series capacitor was mounted on a PCB and subjected to DC 20V, AC 1V-p-p. It produced 20dB of acoustic noise compared to the 55dB produced by an identical MLCC that did not have the metal terminals and was mounted directly onto the PCB. The KRM series capacitor was also subjected to up to 6mm of PCB flexure without any cracks appearing, while the traditional MLCC had cracked before 3mm of flexure was reached. In heat shock cycle tests, the KRM series again outperformed the traditional MLCCs after 2000 cycles of -55/+125oC, 5 minutes, with no visible cracking or deformation of the capacitor or the solder joints.

For further information and reader enquiries:

Established in 1944, Murata is headquartered in Japan and has European offices in Germany, the Netherlands, the UK, Switzerland, Italy, France, Spain, Denmark, Sweden, Finland and Hungary.