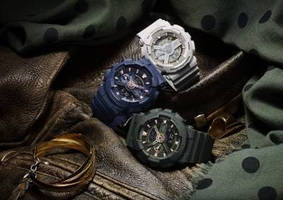 "The Military collection for the S Series line embodies the toughness the G-SHOCK brand is known for," said David Johnson, Vice President of Timepiece Division Casio North America. "The matte coloring and slender band elevates the S Series toughness into the fashion space."

The S Series line uplifts the G-SHOCK brand into the contemporary fashion space for the female consumer who loves G-SHOCK watches, but feels they may be too large for her wrist. G-SHOCK continues to offer brilliant technical innovations through S-Series but now extends itself into presenting watches as a sporty fashion accessory.

The S Series collections are available globally, and are carried at Nordstroms, Macy's, select department stores and fashion boutiques, as well as G-SHOCK Soho NYC store, and online at www.gshock.com/s_series. Price point is $130.00.

About G-SHOCK
CASIO's shock-resistant G-SHOCK watch is synonymous with toughness, born from the developer Mr. Ibe's dream of 'creating a watch that never breaks'. Over 200 handmade samples were created and tested to destruction until finally in 1983 the first, now iconic G-SHOCK hit the streets of Japan and began to establish itself as 'the toughest watch of all time'. Each watch encompasses the 7 elements; electric shock resistance, gravity resistance, low temperature resistance, vibration resistance, water resistance, shock resistance and toughness. The watch is packed with Casio innovations and technologies to prevent it from suffering direct shock; this includes internal components protected with urethane and suspended timekeeping modules inside the watch structure. Since its launch, G-SHOCK has continued to evolve, continuing to support on Mr. Ibe's mantra "never, never give up".