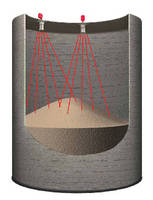 Integrating multiple point measurement data from two 3DLevelScanners, MVL Multiple Scanner System displays visual representation of material surface, which shows high and low points in bin such as cone up, cone down, sidewall buildup, or bridging. Reports generated by 3D software provide data such as volume as percentage, in bushels, or cu ft or meters; max, min, and average levels or distances to product; weight in U.S. tons, lb, or metric tons; and historical logs of bin measurements.


(Lincoln, Nebraska) BinMaster® Level Controls has introduced the MVL multiple scanner system that integrates multiple point measurement data from two 3DLevelScanners to cover a very wide surface area and provide better inventory accuracy for large vessels than any other level measurement device. Designed specifically for the challenges of very large bins, the BinMaster MVL system displays a visual representation of the material surface that shows high and low points in the bin such as cone up, cone down, sidewall buildup or bridging. Reports generated by the 3D software provide data such as volume as a percentage, in bushels, or cubic feet or meters; maximum, minimum and average levels or distances to product; weight in US tons, pounds or metric tons; and historical logs of bin measurements.

An MVL system consists of two model MVL 3DLevelScanners, a controller that aggregates the data, 3D Vision software to be loaded onto a PC, and a 3DLinkPro modem for remote access to the scanners. The BinMaster MVL system works by integrating the measurement data from two scanners mounted on the top of the vessel in locations optimized to most effectively cover the entire surface area of the material. Generally, one scanner is mounted near the center and the other eight to ten feet from the outer perimeter. The scanners take multiple measurements of the material surface using dust-penetrating, acoustic-based technology. A controller then combines the data from the two scanners and generates a single merged visual representation of the topography of the material and displays the image on a PC loaded with the 3D Vision software that can be viewed as real-time 3D images or historic 3D image movies.

"The BinMaster MVL system provides the best inventory accuracy for the bigger bins and structures our customers are dealing with today," stated Todd Peterson, BinMaster's vice president of sales. "Since early 2009, BinMaster has installed 3DLevelScanner technology at hundreds of customer locations in diverse applications such as grain, feed, cement, aggregates, fertilizer, milling, food manufacturing, ethanol, plastics, power and mining. The MVL is BinMaster's newest solution to meet the needs of customers who are demanding better inventory accuracy from large silos that are extremely difficult to measure."

BinMaster is a division of Garner Industries - an ISO 9001:2000 certified company established in 1953 and headquartered in a 75,000 square foot manufacturing facility in Lincoln, Nebraska, USA. BinMaster is strategically focused on designing, manufacturing and marketing reliable, proven sensoring devices for the measurement of bulk solid and liquid materials for the feed and grain, food, plastics, pulp & paper, power, mining, and concrete industries. The BinMaster product line is sold worldwide and features many diverse technologies for bin level indication and measurement, being well known for its SmartBob2 advanced inventory management solution. For more information about BinMaster, visit www.binmaster.com.
Share