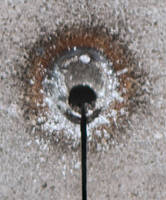 
Champlin, Minnesota – Laserdyne’s new SmartPierce™ creates a clean pierce point that is the same diameter as the cut width. This eliminates splatter of molten material around the pierce location making for a consistent and smoother appearing entry point.

Using Laserdyne’s exclusive SmartPierce feature, the diameter of the pierce point is smaller than a conventional pierce point when controlled by the system software ensuring that it is the same width as the cut.

The SmartPierce capability is important in wide range of applications from thick to thin metal cutting. For example, in many medical devices, electronics and fine mechanics applications requiring small features and thin materials, features may be too small to allow for piercing the “drop-out” or scrap portion of the material. SmartPierce solves this problem. Additional application features such as slots can be produced in a single pass without moving around the outside profile of the feature. This minimizes time producing the feature.

Other applications require the elimination of molten metal around the cutout area for structural and/or cosmetic requirements. SmartPierce eliminates the need for post processing cleaning following laser cutting.

SmartPierce is a new feature in Laserdyne’s S94P high speed and tightly integrated system that controls the timing of every laser pulse for pinpoint accuracy. Even when speed and hole spacing varies, the S94P controller delivers precise laser pulses.

For more information about SmartRamp and the full suite of unique Laserdyne laser software and system features, call 763-433-3700.