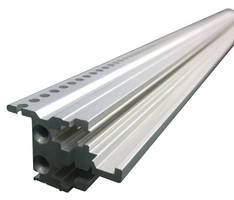 Mounting Rail supports high insertion forces. Unit accepts OpenVPX or other architectures boards which are based on the IEEE 1101 specification. Product features a thicker metal and re-enforced design to offer strength and durability.

Pixus Technologies, a provider of embedded computing and enclosure solutions, has released a new mounting rail that supports very high insertion forces. The modular extrusion rail accepts standard OpenVPX or other architectures boards based on the IEEE 1101 specification.

In many OpenVPX systems, the high insertion forces of some plug-in modules can cause standard mounting rails to bow or crack. The rugged Pixus version features a thicker metal, has two mounting screws, and a re-enforced design to provide strength and durability. When utilized in concert with Pixus' new offset card guides, both 4HP and 5HP plug-in modules can be used in the same subrack.