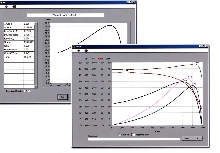 Magtrol's M-TEST 4.0 Software is a state-of-the-art motor testing program for Windows®-based data acquisition. Used in conjunction with Magtrol's Motor Testing Equipment, M-TEST provides testing and data options to help determine the performance and characteristics of a motor under test. The data generated by the program can then be stored, displayed and printed in tabular or graphic formats, and easily imported into a spreadsheet.

Magtrol's M-TEST 4.0 is ideal for simulating loads, cycling the unit under test and motor ramping. Tests can be programmed to run on their own and saved for future use, allowing for valuable time savings in production testing and incoming/outgoing inspection. And because it is easy to gather data and duplicate tests, M-TEST is ideal for use in engineering labs.

Also available is MT-TEST 4.0, a variation of M-TEST that allows the user to perform temperature measurement testing. MT-TEST provides complete dynamometer control, allowing for temperature measurement while performing load simulation for duty cycle and life testing. The software is ideal for performing heat rise curves on different areas of a motor and is now compatible with National Instruments(TM) FieldPoint Modular Distributed I/O System. All other features are identical to those of M-TEST.
Share