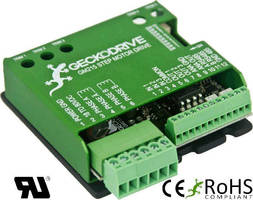 The GM215 is our newest UL Recognized (file number E344711) motor/motion controller and has been designed from the ground up. Featuring a full motion controller and GeckoMotion software compatibility it can run up to four axes of coordinated motion off of onboard flash memory. Recommended for use with robotics, manufacturing, filmmaking, aerospace and industrial automation it can free up both budget and space constraints with its low cost and small size. Some notable features of the GM215 are:

The GM215 can operate as a conventional STEP and DIRECTION input step motor drive.

MICROSTEPPING: The GM215 has a 10 microstep native resolution; each full step angle of the motor is divided into 10 equally spaced microsteps so a 200 step per revolution motor has 2000 stopping locations per revolution.

SUB-MICROSTEPPING: For the 10 microstep resolution, each input step pulse is divided into 32 sub-microsteps resulting in a motor smoothness equal to a 320 microstep drive.

MORPHING: The GM215 morphs from sine-cosine motor currents at low speeds to square-wave currents at high speeds. This technique extracts the maximum possible power from the motor at higher speeds. Morphing begins at 240RPM and ends at 360RPM.

AUTOMATIC STANDBY CURRENT: If enabled, the motor phase current is reduced to 70% of the set value and the GM215 motor switching topology is changed to a low heating recirculating mode. This happens 1 second after the last step pulse is received.

The GM215 motion controller core is a 16-bit MCU, FPGA, Flash ROM and an RS485 interface transceiver. The motion controller executes ASCII format commands sent from an external PC or from its own non-volatile memory.

FTDI RS485 CABLE can be used to communicate with PC, to program on-board FLASH ROM, and to update latest G215 PIC24 microprocessor code.

'ON THE FLY' MOTION CONTROL: Acceleration, velocity and destination can be changed even while the motor is in motion. The new values apply immediately.

MULTIPLE AXIS MOTION: Up to 4 GM215 drives can communicate with each other to execute coordinated multi-axis motion.

RUN FROM STORED PROGRAM: The GM215 can run stored motion programs from its non-volatile Flash memory without a computer connected to it. The memory can store over 65,000 coordinates or program lines.

DIGITAL OR ANALOG CONTROL: The GM215 can be controlled by PC program. User can set up acceleration, velocity, and distance by typing in proper number according to different applications.

The GM215 also has 3 on-board trimpots to allow setting acceleration, velocity and destination instead of using digital settings.

Analog value can even be changed during motor is running. These features can be used in applications such as real-time speed control and position adjust.

BOOT-LOADER: The user can update the GM215 firmware using the built in boot-loader function. More powerful functions and modules will be added and posted on GECKO DRIVE website, user can download the latest code and flash the microprocessor using boot-loader.
Share