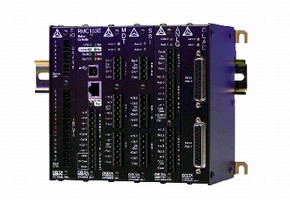 Steve Nylund, Delta's CEO stated, "The RMC150 with RMCTools delivers even more functionality and ease of use to multi-axis fluid power and servo electric motion applications." Nylund added, "Delta's powerful and intuitive RMCTools software has been field proven for the past three years on Delta's 1- and 2-axis RMC70 Series and will serve to quickly make the RMC150 a popular choice for both basic and complex multi-axis applications."

The RMC150 uses RMC100 Series motion interface modules and can be "mixed and matched" in more than 500 configurations of 2-, 4-, 6-, or 8-axis for flexible motion control choices. And built-in full duplex 10/100Mbit Ethernet port with a convenient USB port provides a programming connection freeing up a module slot for expanded discrete I/O.