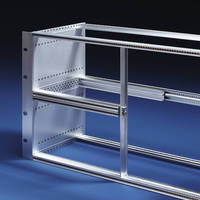 Available in typical heights of 3U and 6U or 4U and 7U to allow for spacing for fans, modular subracks come in 84HP (19 in.Â rackmount), 42HP,Â  and 21HP widths. Extruded railsÂ have tapped holes and offer optional extensions for IEEE injector/ejector latches. Multiple depth options are available, and EMC versions are standard. Made of aluminum, components in subracks haveÂ clear chromate finish. Ruggedized subracks and rail components are also available.

Pixus Offers Modular Subracks for Mounting of 3U, 6U and Custom Sized Boards


Waterloo, Ontario –  Pixus Technologies, a provider of embedded computing and enclosure solutions, now offers modular subracks and components for plugging of various sized boards.  The subracks are commonly 3U and 6U high or 4U and 7U allowing for spacing for fans.

Components in the Pixus subracks standardly have a clear chromate finish and are made of lightweight aluminum.  Pixus offers ruggedized versions of its subracks and rail components.  The rugged Mobile line of subracks has shown proven reliability in German railway applications for decades.  The company also offers double rails for extra strength and rigidity.

Leveraging over 20 years of innovative standard products, the Pixus team is comprised of industry experts in electronics packaging. Founded in 2009 by senior management from Kaparel Corporation, a Rittal company, Pixus Technologies' embedded backplanes and systems are focused primarily on  ATCA, OpenVPX, MicroTCA, and custom designs.    Pixus also has an extensive offering of VME-based and cPCI-based solutions.   In May 2011, Pixus Technologies became the sole authorized North and South American supplier of the electronic packaging products previously offered by Kaparel Corporation and Rittal.