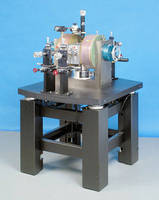 
Janis Research Company is pleased to announce that it is offering a new series of micro-manipulated probe systems with a horizontal external magnetic field. The basic probe station had been re-designed to operate at improved liquid helium efficiency with a typical loss rate of less than 0.8 liter per hour at 5 K. The basic cryostat is still based on the model ST-500 ultra low vibration microscopy system that was developed for high spatial resolution optical microscopy, providing outstanding sample positional stability. The typical vibration level is ± 25 nm and the long-term drift of approximately 2 nm/min.

This probe station is combined with a room temperature electromagnet that offers a variable horizontal magnetic field of up to 0.6 T (6000 Gauss) with typical field homogeneity of 2% over a 25 mm diameter. The probe station operates from 3 K up to 475 K, with an option up to reach up to 650 K. The probe station can be used either with liquid helium or liquid nitrogen. The system can be provided with up to four low frequency or microwave (up to 67 GHz) probes or optical fiber probe arms, and is ideal for the study of magneto-optical and magneto-electrical properties in a variety of experiments, including quantum dots, spintronic devices and nanoscale electronics. Several types of probe tips are offered with 3-axis precise manipulation for each probe, along with probe cooling to minimize the heat load to the device under test.

The system is supplied with a cryogenic Hall probe and readout to measure the precise value of the magnetic field at the chuck, and is supported on a floating vibration isolation table for quiet operation in a variety of lab environments. It also includes a high quality microscope and CCD camera and color monitor, with typical resolutions of 2 to 5 microns. The probe station sample mount can also be mounted on a high precision rotary stage (1 milli-degree) to change the sample orientation relatively to the magnetic field direction, for measuring angular dependent magneto-transport properties of materials.
Share