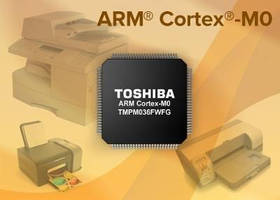 SAN JOSE, Calif., – Toshiba America Electronic Components, Inc. (TAEC)*, a committed leader that collaborates with technology companies to create breakthrough designs, today announced the latest addition to its TX00 series of microcontrollers (MCUs) built around the ARM® Cortex®-M0 processor. The new TMPM036FWFG is specifically designed for use in multifunction peripheral (MFP) devices and printers. As the Cortex-M0 is the smallest available ARM processor [1, the TX00 series MCUs are well suited for use in these and other end products in which both small footprint and low power consumption are essential.

In MFP and printer applications, the microcontroller must communicate with the main control unit and onboard peripherals units. It also needs a timer function that can output pulses to control stepping motors and DC motors. An increase in the number of channels for both functions is key to developing more fully featured MFPs and printers.

The TMPM036FWFG offers two more communication and four more timer function channels than Toshiba's current product offering in this family. The TMPM036FWFG incorporates an 8-channel communication interface and a 14-channel 16-bit timer. Developers can select the optimum microcontroller from the product family according to the system scale or usage from these two products.

The TMPM036FWFG's ARM-Cortex-M0 processor allows use of the same development environment system as for Toshiba's current ARM Cortex-M-based TX03/TX04 series. This can improve the cost-efficiency of system development and enable the device to be designed into other appropriate end products such as consumer electronics and digital and industrial equipment.

Housed in a 14mm x 14mm LQFP100-pin package, the TMPM036FWFG features a maximum operating frequency of 20 MHz, a built-in 8-channel communication interface (6-channel SIO/UART; 2-channel I(2)C), and a built-in 14-channel 16-bit timer. Operating voltage ranges from 2.3 to 3.6V, and available internal memory is 128Kybtes of Flash and 16 Kbytes of SRAM.

Sample shipments of the new TMPM036FWFG microcontroller will commence in March 2015.

ARM and Cortex are registered trademarks of ARM Limited (or its subsidiaries) in the EU and/or elsewhere. All rights reserved.

Information in this press release, including product pricing and specifications, content of services and contact information, is current and believed to be accurate on the date of the announcement, but is subject to change without prior notice. Technical and application information contained here is subject to the most recent applicable Toshiba product specifications.