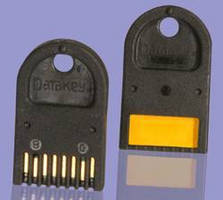 The SGT4Kb GammaSafe memory token contains four kilobits of non-volatile, re-writable memory. The memory is accessed using an SPI bus and is functionally similar to an SPI EEPROM. But unlike actual EEPROM devices, which experience data loss and even device failure when exposed to significant doses of gamma radiation, GammaSafe memory tokens have been proven to withstand up to 45kGy (4.5Mrad) of gamma radiation with no data loss.

Medical device manufacturers who produce single-use or limited-use disposable attachments (e.g. catheters, filters, tubing, medical lasers, etc.) that plug in to a base controller can now add a non-volatile memory device to the attachment, even if their attachments contain no active electronics. Adding a GammaSafe memory token to an attachment enables several applications. For example, the GammaSafe memory token can store an encrypted product authentication code to protect against counterfeit disposables. The re-writable memory can also be used to limit the usage of the attachment, ensuring that it is not used more than the prescribed number of times. The disposable's model number and associated parameters, along with calibration information can be written to the GammaSafe token during production; then, in the field, this data can be automatically transferred to the base controller unit, eliminating the chance for human error from incorrect data entry.

"Our rugged SlimLine(TM) memory tokens have been used with disposable medical devices for more than 15 years," stated Paul Plitzuweit, business development engineer for the GammaSafe product line. "Our traditional SlimLine tokens survive both EtO and autoclave sterilization methods. Now, with the addition of the GammaSafe line, we have a portable memory solution for OEMs of medical disposables no matter which sterilization method they use--EtO, autoclave or gamma."

Unlike RFID solutions that require OEMs to integrate complicated RF transceiver circuitry and an antenna into their embedded designs, integrating the GammaSafe memory system only requires the addition of a simple receptacle. No complex circuitry is needed--the contacts of the GammaSafe receptacle simply connect directly to the microcontroller's SPI port. When the GammaSafe memory token is inserted into the receptacle, the microcontroller can read and write to it just as if it was an SPI EEPROM IC soldered to the board. Further, because the GammaSafe system is contact-based, as opposed to wireless, there is no ambiguity as to which memory device is being read--a frequent concern with RFID and other wireless systems.

The GammaSafe memory token is offered with an optional integrated tether. The optional tether consists of a 5-inch (12.7 cm) cable-tie that has been "pre-looped" and integrated into the head of the memory token. This allows OEMs an easy way to attach the GammaSafe token to their disposable devices.

OEMs who would like pricing, availability, samples or more information on the GammaSafe memory token and receptacles are encouraged to contact the Datakey Electronics factory at info@datakey.com or 1-800-328-8828 (+1-952-746-4066).

Datakey Electronics is based in Savage, Minnesota, and is a fully vertically-integrated, minority woman-owned small business, designing, molding and assembling all of its products in its own custom-built factory.