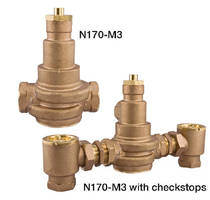 
North Andover, MA.... May 4, 2009 Watts is pleased to introduce the Series N170-M3, the next generation of master tempering valves for hot water distribution in commercial and institutional facilities.

Although the N170-M3 has been re-engineered inside and out, it maintains the exact roughing-in dimensions of its' Series M2 predecessor, making direct replacement trouble-free. The Series M3 is also offered with checkstops (with filters) for new installations.

Other performance enhancements include greater control range of 90 - 180°F (32 - 82°C) eliminating the need low and high temperature models. The M3 features a 5°F (3°C) approach temperature, which is ideal for applications where low temperature hot water is delivered to the end-use fixtures.

Founded in 1874, Watts Regulator Company, part of the Watts Water Technologies family, is one of the world's largest independent valve companies with 11 factories in the United States and Canada. Watts Regulator designs, manufactures, and sells an extensive line of flow control products for the water quality, residential plumbing and heating, commercial and OEM markets.
Share