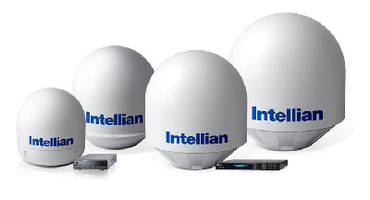 Irvine, Calif. - Intellian, the world's technological leader in marine satellite antennas, announced today the first marine satellite TV antenna compatible with programming signals in all world markets, the w-series. Designed completely in house, the w-series features the Intellian exclusive multi-band WorldView Low Noise Block (LNB) Module. The new line consists of two commercial 3-axis stabilized satellite TV antenna models, the t110W and t130W, and two recreational 2-axis models, the i6W and i9W. W-series systems are the only antenna solutions capable of receiving all types of satellite TV signals in all markets around the globe. With the installation of a single i6W, i9W, t110W or t130W system, recreational and commercial boaters achieve a new level of satellite TV convenience, as well as unparalleled access to the greatest number of channels at sea.

The Intellian w-series marine satellite antenna systems' WorldView LNB Module receives both circular polarized signals used in the Americas and linear polarized signals that are standard throughout the rest of the world. Offering the high-quality access to satellite TV services that is synonymous with Intellian, boaters are no longer required to undertake the painstaking hassle of purchasing multiple LNB's , reconfiguring complex systems and manually changing the LNB unit inside the antenna dome each time the vessel crosses into a different satellite service region. The w-series' WorldView LNB Module allows mariners to seamlessly switch between circular DIRECTV®, DISH Network®, ExpressVu and Sky Canada services in North America; DIRECTV Latin, Sky Brazil and Sky Mexico programming in Central and South America; and linear polarized services using Universal Quad LNB in Europe, Africa and the Middle East, as well as Asia and the Pacific - all by simply pressing a remote control button.

"The w-series marine satellite antenna systems were developed by Intellian engineers and truly demonstrates our commitment to being the technological leader in the marine satellite antenna market," said Eric Sung, president and CEO of Intellian. "Designed to address the needs of commercial and recreational ocean-going vessels traveling across different satellite TV services markets around the world, the heart of our new antennas is our exclusive, innovative WorldView LNB Module which provides satellite signal access and capabilities previously unavailable. We are confident boaters will quickly recognize how the w-series improves the convenience and quality of satellite entertainment at sea."

The Intellian w-series i6W, i9W, t110W and t130W satellite TV antenna systems have a suggested retail price of US $9,495, $14,995, $21,995 and $24,995, respectively. The
w-series will be available in December 2009 and can be purchased from authorized Intellian dealers and distributors throughout the Americas. For more information on the Intellian w-series satellite TV antenna systems, the Intellian WorldView LNB Module, Intellian and its entire product line, compatible satellite services around the world, or international pricing and distribution, please visit intelliantech.com or call (949) 916-4411.