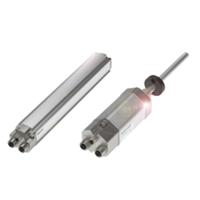 Ethernet/IP is the most widely-adopted industrial fieldbus in North America, according to Scott Rosenberger, Product Marketing Manager for Balluff's Measurement products. "The ability to provide direct Ethernet/IP connectivity with Balluff's class-leading linear position sensors is big news", says Rosenberger. "In addition, features such as integrated CIP-Sync™, and a built-in webserver set the Balluff Ethernet/IP linear position sensors ahead of the pack in the industrial sensing arena".